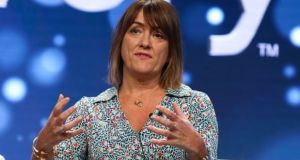 Susanna Dinnage was to become the Premier League’s chief executive in the new year but has informed the organisation that she no longer wants to take up the post. Photograph: David Buchan/Variety/Rex/Shutterstock

Susanna Dinnage has told the Premier League she will no longer be taking up her position as its chief executive.

It was announced in November that Dinnage would replace Richard Scudamore at the Premier League at the beginning of the new year, having worked as the global president of Animal Planet, part of the Discovery group of TV channels. “I am excited at the prospect of taking on this fantastic role,” she said at the time. “The Premier League means so much to so many people.”

Issuing a statement regarding her decision to no longer take up her post, the Premier League said: “Despite her commitment to the Premier League in early November, Susanna Dinnage has now advised the nominations committee that she will not be taking up the position of chief executive.”

It is understood Dinnage is staying at Discovery, which she joined in 2009. Her only involvement in sport was when she ran Discovery’s British and Irish operation, which included responsibility for Eurosport.

She had been described as the “outstanding choice” by the Chelsea chairman, Bruce Buck, who led the Premier League’s recruitment process. Her U-turn comes as a huge surprise and blow for the administration of English football’s top-flight, which generated a record £4.5bn in revenue in the 2016-17 season, with that figure projected to rise further over the next two years.

The Premier League will have to begin a fresh process to find a successor for Scudamore, whose departure after a 19-year tenure has been overshadowed by controversy after he accepted a £5m golden handshake made up of £250,000 contributions from all 20 top-flight clubs. – Guardian service