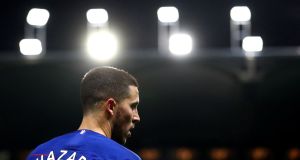 Maurizio Sarri has betrayed his burgeoning frustration over the Eden Hazard contract standoff by telling the Chelsea hierarchy that it is “time to decide” on the player’s future for the good of the club.

Hazard’s deal expires in the summer of 2020 and despite Chelsea’s best efforts, ongoing since their Premier League title win in 2017, he has decided against extending his terms.

Chelsea have offered Hazard in excess of £300,000 a week and it is unclear what more they could have done but Sarri made it plain that he felt the situation had gone on for too long. Hazard has made no secret of his desire to one day play for Real Madrid.

“I think that it’s time to decide,” Sarri said. “Will I sit down with him? No, because I don’t have the power to do this. I am the coach, I am not the president. I am not in charge of the market. I want to speak to him only about his position on the pitch. We have to solve this problem if we want to programme the future.”

Sarri, who described Hazard as “one of the most important players in Chelsea history”, also grew exasperated when questioned about his decision to use the Belgian as a false nine in the club’s past four league games. After the most recent – the 2-1 win at Watford on Boxing Day – Hazard said once again that he did not think the false nine was his best position and he wanted to move back to the left.

“I cannot see the problem of Hazard in this role – he played four matches [there]and scored three goals and made two assists,” Sarri said. “I am really very happy with him in this position because he is very able to score, first of all; very able to open spaces for teammates and very able to come to play with teammates.

“At the moment I am very happy with him in this position. In the future, he can play also as a winger, of course. I don’t know if he prefers to play as a winger but if he is able to play like in the last match in the centre, for me it’s not a problem to put him in the centre.”

Sarri said he left Álvaro Morata out of the squad at Watford for “tactical” reasons – the striker had previously been unavailable because of a knee injury – and it remains to be seen whether he will be recalled for Sunday’s visit to Crystal Palace. It sounded as though Sarri was ready to persist with Hazard as the false nine.

Sarri reported that Pedro was out for 10 days with a hamstring problem and that Callum Hudson-Odoi was unlikely to feature at Palace because of a less serious hamstring issue. – Guardian service