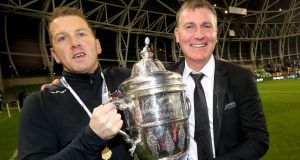 Dundalk have confirmed their new management line up with, as expected, Stephen Kenny’s long-time assistant Vinny Perth taking charge of the first team and former manager John Gill returning to the club he led to promotion from the first division a decade ago.

Perth, who does not have the Pro Licence coaching qualification required under FAI rules to be a ‘manager’ at Premier Division level, gets the formal title of Head Coach with Ruaidhri Higgins, who had various responsibilities under Kenny including the scouting of opponents, appointed as his assistant.

Gill, who had a successful spell in charge of the club before then owner Gerry Matthews decided to advertise his job when his contract ran out - despite the side having just completed its return to the top flight - has been named as “First Team Coach”. The Dubliner does have a Pro Licence.

All three have signed two-year contracts with the club which won the league and cup double last year. This was a major factor in Perth getting the opportunity to make the step up, despite his lack of experience as an actual manager and the profile of some of those who applied for the job.

“The board recognise that continuity is crucial at the football club given the levels of success achieved in recent seasons,” says chairman Mike Treacy. “We are convinced that in Vinny, Ruaidhri and John we have a structure in place which will ensure we continue to build upon the success of recent seasons, and achieve the club’s objectives on the pitch.

“We appreciate the patience of our supporters in recent weeks as we have worked tirelessly to outline our vision for the future of the club, and assure everyone we are excited about the future.”

Given the need to sustain the success achieved under Kenny, Perth was always expected to be given the chance to take over. Much of the delay in formally announcing his appointment was caused by the search for a suitably qualified coach, willing to come in to the particular roll and able to make a significant contribution.

Perth inherits a very strong first team squad which will start the new season as favourites to retain the title, but Kenny was clearly a huge part of the club’s success over the past few seasons and the American owners are hoping that by appointing Perth they will retain as much of the ‘magic’ as possible.

“I am delighted to have been appointed Head Coach,” said Perth, “and I am excited by the challenges ahead, namely defending our League of Ireland and FAI Cup trophies, and embarking on another European campaign.

“I’d like to thank the Chairman, and the rest of the board, for showing faith in myself, Ruaidhri and John, as well as for their great support on and off the pitch. I feel strongly that continuity is the key to taking Dundalk Football Club forward, a view that the board also share. I look forward to working with all the staff at the club, and I particularly wish to welcome John Gill back in his new role.

“John is someone who will bring vital experience, hard work and dedication to the club. John and I have shared football ideas and philosophies for many years and I am excited to work with him. John brings a huge level of experience to the management team.

“I would like to stress to all supporters of Dundalk Football Club, that all the planning and preparation is well underway as we embark on our pre-season schedule. After a gruelling but highly successful campaign in 2018, everyone at the club is motivated and ready to get going again. I’m looking forward to seeing all of our supporters in February for our first league game against Sligo.”