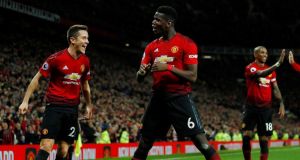 Manchester United caretaker boss Ole Gunnar Solskjaer praised Paul Pogba for playing “the efficient game” with “no showboating” after the midfielder’s impressive showing in a 4-1 victory over Bournemouth at Old Trafford yesterday.

Pogba scored two goals for the second successive match and set up another as United’s run of wins since sacking Jose Mourinho and appointing Solskjaer was extended to a third game.

Pogba has impressed in all three of those contests – across which the Red Devils have scored 12 times – having been restored to the starting line-up by Solskjaer.

“That today is a top, top performance for a midfielder, because it is all round. It’s work rate, it’s dangerous in the box, he wins headers, he wins tackles and there is no showboating. It’s touch, pass, move, and he plays the efficient game, and Paul knows he’s at his best when he plays that game,” said Solskjaer of the Frenchman .

Pogba produced a close-range finish in the fifth minute, added a header in the 33rd, and then – after Marcus Rashford had made it 3-0 and Nathan Ake replied for Bournemouth – provided the assist as substitute Romelu Lukaku made it 4-1 with 18 minutes to go. He was also inches away from completing a hat-trick when Asmir Begovic tipped his low shot on to a post.

The first goal was created in fine style by Rashford and Solskjaer had plenty of praise for the 21-year-old England forward.

“I’m delighted for him because he’s coming on and he’ll be a top, top player. The way he’s gone about this job, playing up top, the work rate he puts in... he’s got everything,” said Solskjaer.

“I’m really pleased that he’ll get goals. He’s scored two now in three games, but his work rate, all the work he puts in, that’s a big pleasing thing for me – with the whole team, because we should never be outworked by anyone. And he’s the catalyst. I’ll have to slow him down at times. And the way he made the first goal as well – hold up play, skills, vision to put it in the right area.”

United had Eric Bailly sent off for a challenge on Ryan Fraser in the 79th minute and Solskjaer had no complaints about the decision, adding: “Eric won’t complain either – he knows he’s mistimed that one. It’s a rash tackle”.

The result, which followed the 5-1 win at Cardiff and 3-1 success over Huddersfield, makes Solskjaer the third man to win his first three league games in charge of United, after Matt Busby and Mourinho.

Pogba, for his part, exuded confidence and positivity throughout the match and just enough diplomacy after it to avoid a direct criticism of Mourinho, with whom he had a fraught relationship.

“We are Manchester United and we need to be at the top of the league, it is just a reaction of all of the players and everyone is enjoying themselves,” said Pogba.

“It is different, we still won games with the old manager but it is just a different style of playing, we are more offensive and we are creating more chances and that is how we want to play,” he added.

“I always want to do more, but I want to play for the team and play simple.”

“We needed the win and we had a great performance as well. We are coming back, and there is still a long way to go, but to finish the year like that is beautiful,” said the French World Cup winner.