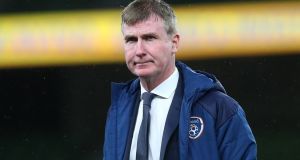 Interim FAI chief executive Gary Owens spoke with Stephen Kenny and prominent members of his backroom staff on Friday in relation to the video shown to players before last week’s game against England and the speech he made immediately afterwards.

The conversations are said to have gone well and there still appears to be no suggestion of any wrongdoing on the part of the Ireland manager.

Suggestions that the association’s board were to meet to discuss the matter were again dismissed by senior figures within the organisation, who said they were satisfied that any claim that players might have been offended by the attempt to motivate them for the game had to be thoroughly investigated. They said they were unaware of anything so far to substantiate them.

The story had originated on the Mail Online which claimed that members of the squad at Wembley had been “shocked” by the political nature of a three-minute video that included clips of previous games between the two countries and some historical references.

One prominent member of the current set-up said that he had not heard anything in the week since to suggest that anyone had taken any offence.

Ireland defender Enda Stevens said, however, that it’s “disappointing” that someone in the FAI has leaked the contents of a team meeting.

The Sheffield United defender missed Ireland’s last three games due to injury, but is part of the players’ WhatsApp group and insists there has been no mention of the allegedly offensive video played to the team in advance of last week’s 3-0 defeat to England in Wembley.

“I think it’s disappointing it’s come out to the media, in the way it’s been leaked,” said Stevens, who played every minute of Kenny’s first five games in charge.

“What happens in a meeting, in a changing room – right or wrong – should stay there. It’s always been the case.”

Stevens was in Sheffield rehabbing a knee injury as Ireland lost to England and Wales, before drawing with Bulgaria, but kept in touch with his international teammates.

“I haven’t heard anything about the meeting, the lads in the meeting haven’t raised any awareness to it, so as far as I’m concerned, I don’t think there’s anything in it,” he said.

“I don’t think any players even noticed, because nothing’s been said. We have a WhatsApp group, but nothing has been raised.”

The leak has led to a slew of comments in defence of Stephen Kenny, with many believing the leak is part of an agenda to undermine the former Dundalk manager.

Kenny is still looking for a first win after eight games, with no goals scored in seven games. Stevens, though, believes it’s unfair to judge the new manager under current circumstances.

“It’s obviously been difficult [to watch], but if you look at the circumstances that the squad and the manager have had to go through, with the testing and injuries, it hasn’t been the easiest for them,” he said.

“It’s been a difficult spell for us, we just don’t seem to be getting any luck at the minute.

“I think you just have to look at the circumstances that have been dealt up to him [Kenny] when looking for hope. He’s never really had a fully fit squad to pick from.

“We went into the Slovakia playoff game, looking fully fit and the day before the game we get two players ruled out through coronavirus.

“It affects you, it affects the squad, the manager, everything you’ve been working on, everything changes, and he’s been always having to adapt to these circumstances. It hasn’t helped.

“We have to now look forward to March and hope it will all come together.”