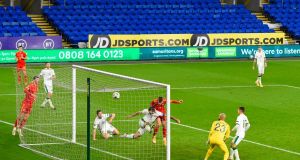 Having spent so long in the international wilderness before achieving some success in style, the Welsh should serve as something of an inspiration for a team like Ireland as it tries to play its was out of the doldrums. That would be easier, of course, if we didn’t having to keep playing them.

As is generally the case, there’s wasn’t too much to choose between the two sides in this latest encounter and Ireland had the better of the contest for spells. From the moment David Brooks put the home side in front after 66 minutes, however, they always looked the more likely winners.

It was, as Stephen Kenny suggested afterwards, a narrow defeat but another loss of any description, especially one in which his side failed to score, was always going to further dent morale.

At the end here, the Dubliner said that he is not generally one to point to positives after a defeat but, as he asked rhetorically at one stage in another context, “What can you do?”

He had a fairly long list of them, all perfectly valid but after seeing his side set a new Irish record for games played without scoring a goal it inevitably sounds a little beside the point to hear the manager talk up how Kevin Long has done in the less familiar of the two centre back roles.

His players again sounded downcast and there is some talk of ‘luck’ but the truth of it is Ireland were again not good in or around the opposition area. The lack of an experienced striker was obviously an issue. Kenny continues to invest in Adam Idah, hailing his potential, and he clearly has that in abundance, even as he admits that the 19-year-old is not the finished article.

The likes of Robbie Brady and Shane Duffy should be much closer to what he requires on that front, though, and neither could hit the target here when Ireland did have clear cut chances early on.

He pointed afterwards to the many players who will be back for the World Cup qualifiers next year as evidence that things will improve which is an entirely fair point, but there is not a proven goalscorer on the level required to be really sure.

That, though, is next year’s problem. Right now, beating Bulgaria would be enough to lift the gloom a little before the winter break.

“But at the end of the day,” he acknowledged, “we haven’t won and I know that, I realise that. But Wales are quite a strong team, you’re not going to come over and create loads of chances against them away from home.”

Ireland managed more than their hosts here over the course of the first-half with Duffy and Brady having the best of them and both men should have done better. Neither actually hit the target and even late on when the visitors were chasing the game, the best substitute James Collins could do was a couple of low shots from distance that were easily dealt with by Danny Ward.

In terms of the wider performance, it was familiar enough stuff with eager pressing yielding more possession than Ireland have traditionally been used to away from home and some solid passing helping to ensure the ball was kept far more effectively.

Wales had fractionally the better of things throughout in terms of possession but seemed far less well suited to the 3-4-3 formation with which England had overrun Ireland last Thursday. When Rob Page, though, acted to change it and so provide his side with more of an attacking focal point, the home side scored courtesy of a close range Brooks header, and the game was transformed.

Kenny started to shake things up himself, there was little options really, with James Collins replacing Idah and Jack Byrne getting on in the closing stages to become the first League of Ireland player in 35 years to play competitively for Ireland.

The added urgency the team showed yielded little in terms of added threat and the closest Ireland came to an equaliser was probably the split second it took the Czech referee to decide not to penalise Neco Williams for what clearly looked to be an involuntary handball as he ran back towards his own goal at an Irish set piece. You’ve seen them given, as they say, but almost all everyone seems to be agreed that it would be generally better if they were not.

As Ireland committed themselves to chasing an equaliser, though, Wales might well have had another couple with Darren Randolph doing really well to deny Brooks and Hendrick getting himself sent off while trying to prevent Tyler Roberts racing into space and towards the Irish ‘keeper from the half way line.

Both Hendrick and Jayson Molumby will now miss the Bulgaria game through suspension, added blows to a manager who already had quite enough to be getting on with. Whatever the result there may well be further progress on Wednesday with thr team continuing its evolution from, the more idealistic supporters would suggest, footballing caterpillar to butterfly.

Clearly the World Cup campaign will be the time to properly judge it all but Kenny could certainly do with his side showing signs of developing their ability to fly in what will be the last game before a long lay-off.

Wales have already shown that it can be done.