Stephen Kenny and Ireland in need of some good news 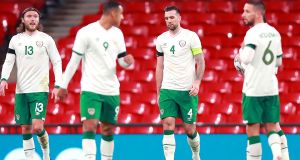 Ireland head to Cardiff on Sunday fresh off the back of a 3-0 defeat to England at Wembley. Photograph: Tommy Dickson/Inpho

The testing times continue for Stephen Kenny and his Ireland players who head to Cardiff over the weekend looking to steady themselves after another setback. Alan Browne’s positive result for coronavirus is just the latest in what seems like a very long list of negatives for a group who currently resemble a jungle expedition in some old B movie, whose members are being unexpectedly pulled one by one into the undergrowth as their leader does his best to steady nerves and urge his men forward.

There was a weariness about the post match analysis in Wembley where Matt Doherty spoke about starting to feel embarrassed when leaving the pitch after disappointing international displays.

Kenny insisted that he was not concerned by the defender’s confession, suggesting that the real surprise would be if a player of his quality felt any other way. Privately, however, he will not be the first manager to wish that Doherty had not been drawn by a press engagement into mulling things over in public.

The 28-year-old did not remotely come across as intending to undermine his manager but, six games into Kenny’s tenure, the suggestion that confidence is becoming an issue for a group that “seemed to give up” at 2-0 and collectively needs to “wake up” can’t have been entirely welcome.

Kenny was himself struggling so soon after the final whistle to find any positives to point to - it’s far from certain how much difference an extra 24 hours would have made - but he defended the decision to take a game against such tough opposition.

“They learned a lot tonight,” he said of his side. “It’s valuable experience and players getting caps is valuable - even some of the players that are not so young haven’t got that many caps - so it’s important international experience against England tonight.”

He readily accepted, however, that losing will have done little to lift the spirits of the group. It is hard to know what all of the thinking was when arranging the fixture - money is said not to have been a huge factor - and it would be interesting to know if having an Oman around to take a bit of a beating was an option; it might well have provided more of a morale booster.

As it is, it was England, beaten last month by Denmark, who were talking afterwards about building on a solid night’s work.

Kenny mentioned but tried not to dwell on the list of withdrawals he has been hit with but will be without Seamus Coleman, Aaron Connolly and Callum Robinson again for the game in Wales. John Egan and Harry Arter have been ruled out too and there is only a faint hope, it seems, that James McCarthy’s family emergency will resolve itself sufficiently for him to return to the squad this weekend.

Reinforcements have arrived in the form of Ryan Manning and Jack Byrne while Jason Knight (from the under-21s) and Josh Cullen have been drafted in and it is hoped that Ciaran Clark and Darragh Lenihan will join the squad on Saturday. Coming hot on the heels of David McGoldrick’s retirement, it is all surely as much as any Ireland manager has had to deal with and far more than he could reasonably expected to successfully overcome given the depth of the talent at his disposal.

Still, he could do with a mustering up an improvement sooner rather than later for Ireland’s hopes of a second seeding in the draw for the World Cup qualifiers will have been dented by Thursday’s defeat and relegation in the Nations League, while it might well actually improve the team’s chances of gaining a back door entry to the next European Championships, as Scotland have just done for this one from League C, would also be something of an embarrassment for a manager still trying to persuade those who don’t rate his achievements in the League of Ireland that he is capable of delivering on his, and their, dreams.

First up are a Welsh side that has generally had an edge over Ireland in recent meetings; their best players being the main difference between the teams although there was nothing at all to choose between them in Dublin last month when the game ended scoreless and the statistics pointed ever so slightly towards local superiority.

They should at least get back to creating some chances, the only thing that is sustaining squad morale if the Thursday evening press conferences were anything to go by. Like Doherty, we can only hope that whoever they fall to, has the wherewithal to put them away.

The home side is set to include Gareth Bale and some very fine young talent but not, on this occasion, Wayne Hennessey, Aaron Ramsey or Joe Allen, all of whom are missing for one reason or another.

So too is Kenny’s opposite number, Ryan Giggs, who is on gardening leave after his recent arrest on suspicion of assaulting his girlfriend.