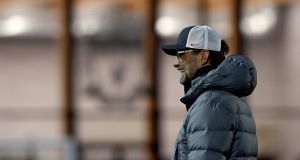 Liverpool manager Jurgen Klopp has spoken to Mohamed Salah about his attendance at his brother’s wedding prior to him returning a positive Covid-19 test.

However, while the Reds boss refused to elaborate on what was said to the Egypt international, who is flying back on Friday but will not be available for Sunday’s match at home to Leicester, Klopp set out his own personal stance which was at odds to his player’s.

“Mo is coming back today. He feels well, no symptoms. Nothing to say in the public about the things I talk to my players about,” said Klopp.

“I’ve been in close contact with him. A brother’s wedding is a very special moment. In the summer I was in Germany, a friend moved his birthday party because of me. Fifty people were there and at the last minute I decided not to go.

“My players are incredibly disciplined. They really know about the situation. Sometimes it doesn’t work out like this. The rest is between Mo and me — we have done that already. Things are fine.”

Klopp has ruled out Jordan Henderson (thigh) and Trent Alexander-Arnold (calf) but is hoping Fabinho will be fit again after missing the last three matches with a hamstring injury.