Troy Parrott and Jack Byrne to start against New Zealand 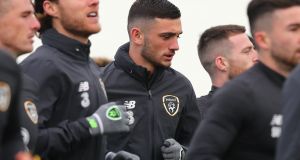 Troy Parrott, Jack Byrne and Lee O’Connor will all start for Ireland against New Zealand on Thursday night with Mick McCarthy revealing that only a couple of the players he intends to use against Denmark with play any significant part in the friendly.

Spurs striker Parrott and Celtic full back O’Connor will be making their senior international debuts while it will be a first start at this level for the Shamrock Rovers midfielder whose standing continues to improve even if the manager appears to remain unconvinced that he is quite at the point where he can make a major impact on the biggest games.

Having barely featured for Tottenham’s first team and not played at all since October 22nd when he scored four for the club’s under-19s in the Uefa Youth League, Parrott is not expected to do anything dramatic enough to catapult him into serious contention to play on Monday but McCarthy does admit that it would be nice to suddenly have a dilemma on his hands.

“I hope he scores two goals and then I will deal with it,” says the Ireland manager. “But it’s hypothetical isn’t it and I don’t really talk hypothetically. Let’s hope he does it, gets the goals and plays really well.

“As with all of them, though, one game doesn’t define them. There might have been a few that’s had one good game and never played again. I might well have played some of those as but it doesn’t take a special kind to be pitched in; it takes a special kind to thrive, to do well, to make a good impression and impress everybody. I hope that’s going to be the case with Troy. Robbie [Keane] did it instantly.”

Byrne, he said, would be asked to do what he has been doing well at club level this season. “I want him to do what he does with Shamrock Rovers, which is to get hold of the ball, pass it, create chances, keeps the ball moving. He recycles it for others and doesn’t give it away. His free kicks, corners, deliveries are good. His penalties are excellent.

“It’s not Denmark by any stretch of the imagination but New Zealand are treating this as a big international game and for Jack it will be, to showcase what he’s got. And he’s got lots. He’s done so much better in the 12 months, maybe I’ve influenced it a bit, TC [his assistant Terry Connor] has. On the ball. And off the ball, he has.”

O’Connor, meanwhile, will start at right back while Ciaran Clark will be one of the central defenders to feature from the outset after a recent run of strong club form.

Robbie Brady is another who will be in the initial 11 although McCarthy sounded sceptical about the Dubliner’s chances of reclaiming a starting place for Monday’s game with the manager suggesting that the Burnley player is more likely to be used from the bench in the qualifier.

“Robbie has impressed me over his the course of his career and I have picked him when he has been fit before. Quite clearly I have thought about him this time. We’ll see how he is but 90 minutes [against New Zealand] would make it difficult for him to play [against Denmark] considering the recovery. If you see me taking him off, he might have a chance of starting.”

1 Gary Neville in Qatar an exercise in semi-journalism
2 Six Nations: Ireland are contenders but England still the team to beat
3 In Donegal Michael Murphy is seen, simply, as a godsend
4 Owen Doyle: Creeping professionalism of schools rugby a threat to the game
5 Mike Catt hopes to have Irish backs purring in Six Nations
Real news has value SUBSCRIBE
Crossword Get access to over 6,000 interactive crosswords