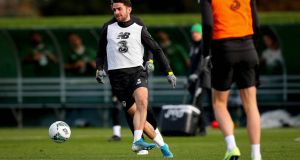 Robbie Brady: “Please God, I can do enough to be in contention for Monday.” Photograph: Ryan Byrne/Inpho 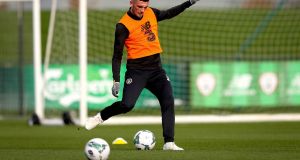 Seven years after his own international debut in a rather low-key friendly seemed to contribute to a breakthrough at club level, Robbie Brady believes Ireland’s game against New Zealand might be the start of something big for young Tottenham striker Troy Parrott.

Brady was three years older than Parrott is now and had a season of Championship football out on loan with Hull City under his belt by the time Giovanni Trapattoni handed him his opportunity against Oman in London in September 2012, but the Dubliner made his mark by scoring and had three more caps by the end of that year.

Just three weeks after that night in Craven Cottage, Brady got on late in a League Cup game to make his debut for Manchester United. He had been at the club for more than four years by then, two of them as a highly regarded academy prospect, then two as a young pro. Looking back now, he admits, he didn’t quite have what he needed to push on at a club that big. Parrott, he believes, show every sign of being completely different.

“I didn’t have the drive that it took to force myself into a Manchester United first team,” he admits now. “I was sort of thrown in there, I was young, away from everyone, I was going back to Dublin all the time.

“It’s a massive thing getting moved up and away at some young age. In hindsight I would have done some things different. (But back then) I was a young lad from Dublin, I’d just signed for Man United. I was on top of the world. Anything anyone said to me I was taking it in my stride.

“Not that I’d thought I’d made it by any means,” he continues. “When you go to a club of such stature, you’re a drop in the ocean. When you’re signing you may have good name here but when you go over there you have to prove yourself and do all things right, which I didn’t do, half of the time.”

Brady believes he lost ground on some of those around him by taking a couple of years to realise what was really required in terms of applying himself at what was an absolutely critical phase of his development. Parrott, he reckons, gives the impression of having learned that lesson rather more quickly.

“No one pushes on as quick as he has without going in and doing things right,” he says. “He seems to have got his head down and trained well; he is pushing on great.

‘Didn’t look out of place’

“It’s great for him, he seems to have the backing of [Tottenham manager Mauricio] Pochettino to play in those games with Tottenham in pre-season, at such a young age. I watched a couple of the games and he didn’t look out of place. At such a young age, he’s a credit to himself.”

Only recently an under-21 international, Mick McCarthy has already said that the teenage striker will make his senior level this week but Brady sees no signs of Parrott being overawed by the speed at which things are happening for him.

“I don’t think so,” he says, “he’s a confident young lad; he didn’t train like he was nervous yesterday. It didn’t seem to faze him at all. It’s a great boost if there are people like him coming in and around; he’s clever, he’s got an eye for a pass, an eye for a goal, a big frame. Hopefully he can contribute something this week.”

Brady is rather hoping to contribute himself, of course, and has his own eye on Monday’s game against Denmark with the New Zealand outing primarily a vehicle to get game time and reassure the manager that he is back to his best after what has been a difficult two-year spell during which his career at Burnley has been badly disrupted by injury.

“It’s been awful, to be honest with you, because you think everything is going to be perfect as soon as you have been stitched up [after a knee operation in December 2017] and you are nearly going to be ready to go, but the surgeon told me it was going to be close to two years before I am back to my best; not that I believed him for a second. I just thought: ‘What does he know?’ But it sort of took me a year to get back to where I was, regarding fitness.

“The badness from the last couple of years is behind me now, though. It has been a difficult time but a good learning curve as well.”

Now, he insists, despite having less than two matches worth of first-team football under his belt so far this season, “I feel really fit. I needed a run of games when I came back from injury which I couldn’t really get, my body was letting me down a little bit.

“I got through the full pre-season, felt as fit as I could be and then got two broken ribs leading into the start of the season. But I sort of picked up quickly from that and when I wasn’t playing on the on the Saturday, I was making sure I had games on Tuesday with the 23s for me to get 90 minutes in.

“It’s been hard while I’ve been away,” he admits, “watching the games, knowing you can’t affect them. But I’m here this week, delighted to be back in and hoping to have a good game on Thursday to show that I’m fit and raring to go. Please God, I can do enough to be in contention for Monday.”