Judge says qualifying would be even sweeter than ’16

Having contributed this time, reaching Euros would eclipse last finals in France 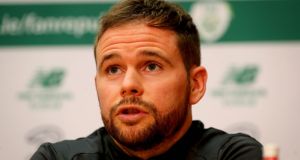 Alan Judge is confident that he is now approaching his best once again. Photograph: Ryan Byrne/Inpho

Having seen his dream of making it to a first major championship with Ireland die in 2016 when he suffered a badly broken leg, Alan Judge believes getting to Euro 2020 would mean even more to him because he will have played a part in getting the team to the tournament this time.

The then Brentford midfielder was only on the margins of the Irish set up during what was Martin O’Neill’s only successful qualification campaign. But his form for the Championship side ultimately made him a very firm contender to make the Ireland squad for France, and he had only recently featured from the start in a friendly win over Switzerland when a poor challenge by Luke Hyam left him facing into a very long-term lay-off.

The road back has not been easy for the Dubliner, who now plays for League One leaders Ipswich, but Judge is fiercely proud of having come into things again under Mick McCarthy, a manager who tried more than once down the years to sign him at club level and has now made it clear that he sees him as someone with something valuable to contribute. That, says the 31-year-old, would all make getting to this European Championships that bit more special.

“I’d really, really love us to get to the Euros. That would be brilliant, amazing, to get to a Euros and have one or two games here in Ireland. I couldn’t think of anything better, really,” he says.

“I feel I’ve contributed a little bit. The gaffer has told me that I am in his thoughts to start games but I’ve played in some, he has used me and I was about to come on against Switzerland until Séamus [Coleman] got sent off . . . the gaffer turned and looked at me and I just said ‘Yeah, I understand’ and went back and sat down. But it’s good that I’m in his thoughts.”

Getting on in Copenhagen at the start of the summer didn’t do him too many favours, of course, with the serious wrist injury he sustained in a challenge by Kasper Dolberg in the final few seconds marking another setback, one that ultimately affected his pre-season, but Judge is confident that he is now approaching his best once again.

“I feel like I’m getting back to where I was,” he says. “I’ve said before, confidence is the slowest thing to get back but I’m gradually getting there. And when I’m away with Ireland it seems to be a little bit different because I always feel that when I’ve played for Ireland I’ve contributed in some way so that give you confidence, doesn’t it.

“I want to play [on Thursday]. I’d see it as an honour if I get another cap. You just try to get out there and do what you can, and hopefully get in the thoughts of the manager for Monday.

“But for me,” he concludes, “everybody just wants to get there. If I play or don’t play, if we get there, I don’t really care.”

Mako Vunipola to miss Ireland game for family reasons 12:30
Man City’s Abu Dhabi owners not the sort to back down over ban 10:51
Pints and sports events; England ready to show their best 07:30
Frank Lampard says Harry Maguire should have been sent off 06:36
Willie Mullins prefers to ‘keep it simple’ and run Benie in Mares Hurdle 06:00

1 Gerry Thornley: England primed to show their best against Ireland
2 Should fans be allowed drink in the stand at sporting events?
3 Man City’s Abu Dhabi owners not the sort to back down over ban
4 Stopping Jonny May’s pace must be high in Ireland’s priorities
5 Mako Vunipola to miss Ireland game for family reasons
Real news has value SUBSCRIBE
Crossword Get access to over 6,000 interactive crosswords