Several debutants for U-21 Euro qualifier including goalkeeper Gavin Bazunu 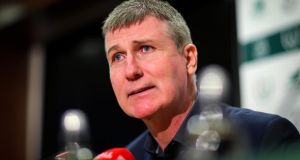 Republic of Ireland Under 21 manager Stephen Kenny: ‘I’m happy with what I have. We have a depth to the squad, I feel.’ Photograph: Oisin Keniry/Inpho

Former Shamrock Rovers goalkeeper Gavin Bazunu will be one of several debutants in Ireland’s Under-21 European Championship qualifier against Armenia in Yerevan on Thursday, according to manager Stephen Kenny, who has had to reshape his plans for the game again after a string of late withdrawals.

His side beat the Armenians in Dublin in September when Troy Parrott scored the only goal of a game in which Jayson Molumby and Aaron Connolly were exceptional. But the bulk of that team is missing for this week’s game, with those three among those ruled out before the manager named his squad. Since then, Caoimhín Kelleher and Conor Masterson have also cried off with injury problems.

“There will probably be eight changes to the team,” said Kenny, “but I’m happy with what I have. We have a depth to the squad, I feel.

“Gavin Bazunu, just 17 years of age, will make his debut, which is terrific for him. We’ve got a lot of changes in the back four. Thomas O’Connor will come in and make his debut after his fantastic season so far at Gillingham [where he is on loan from Southampton].

Armenia will be tough opponents, and we have to formulate a team in a short space of time

“Danny McNamara, who has been in the squad since September, gets an opportunity, and Nathan Collins, of course, who has been terrific at Stoke City so far this season.”

Bazunu, who is at Manchester City these days, only came back into the squad over the weekend as Kelleher was forced to pull out, but is very well regarded and has previously been on the bench for Ireland at this level.

The team is currently top of its qualifying group with 10 points from five games, but lost a little of their momentum last month when they were beaten in Iceland after drawing at home with Italy. After Thursday’s game they return to Dublin for their second meeting of the campaign with Sweden, which takes place in Tallaght on Tuesday evening.

“Armenia will be tough opponents,” said Kenny, “and we have to formulate a team in a short space of time, but we are in a good position in the group and we have to target a win.”

1 Kevin McStay: Maybe a knockout All-Ireland Championship is the long-term solution?
2 Gerry Thornley: Ireland don’t want to box themselves into a corner
3 New Killarney athletic track another jewel in the Kingdom’s crown
4 Lancaster says Ireland need to finish series on a high
5 The Offload: Ireland are stuck in no man’s land
Real news has value SUBSCRIBE
Crossword Get access to over 6,000 interactive crosswords