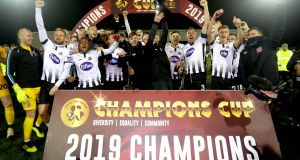 Dundalk celebrate with The Unite the Union Champions Cup after their victgory over Linfield at Oriel Park. Photograph: Ryan Byrne/Inpho

There may well have been a point, well before the end, at which this stopped being all that good for the future of cross-Border footballing relations but the result was a pretty fair reflection of the gap between the sides on the night.

After what had been a tight enough affair in Belfast, it was utterly one-sided here in Oriel where Vinny Perth’s side, despite it being the last game of a very long season, had a yard more pace than their northern opponents and found it endlessly, almost amazingly, easy to create a few yards of space.

After what had been a tight enough affair in Belfast, Dundalk fielded a stronger starting line-up here while the visitors were weakened by the loss of a couple of players, most notably Northern Ireland international Shayne Lavery. The upshot was that Vinny Perth’s side, despite it being the last game of a very long season, had a yard more pace than their opponents and found it endlessly, almost amazingly, easy to create a few yards of space.

Michael Duffy ran riot down the left, Seán Gannon dictated an awful lot of what happened on the other flank and there might actually, very easily have been another few goals.

As it was, by the end, Georgie Kelly (twice), Brian Gartland, Jamie McGrath, Robbie Benson and Pat Hoban had all managed to get their names on the scoresheet but Daniel Kelly, for one, may watch it all back and wonder quite how it is that he didn’t get one or two also.

Chris Shields put it all down to the home side simply having “clicked” and there was no arguing with that. Linfield, though, contributed to it all, or didn’t, depending on which way to want to look at it, with a couple of goalkeeper Rohan Ferguson’s clearances leading almost directly to goals and his defence offering little enough, almost nothing really, by way of resistance through the closing stages.

Ultimately, they ended up looking a lot like extras in a show written for somebody else to star in and, predictably, the majority of the spectators simply lapped it all up.

They got to say what sounded like it might well have been goodbye to Benson and McGrath as they were brought off a little while before a final whistle that was, inevitably, greeted with a joyous chorus of “Champions of Ireland”.

Still, the biggest cheer of the night might have been for the unfortunate stadium announcer who started to announce the “Unite the nation” Man of the Match instead of the “Unite the Union” one then quickly corrected himself.

Despite the scoreline here, Perth made it clear he still sees plenty of life in the greater project . . . the all-island league one, that is.

“Both leagues need to improve,” he said afterwards, “and we have to embrace different challenges. There is no point in doing the same things each season and expecting different results. We [the existing leagues] have just been standing still and we need to be a lot stronger. This league, combined with the one up north, can help make both national teams stronger again.”

Of more immediate significance, though, was the message here being issued to what was the chasing pack this season. “We were right at it tonight and when we play at that intensity there are not many better than us, are there? It was a brilliant night for us and we are not going anywhere, that’s for sure.”

1 Rory McIlroy puts integrity ahead of glory in US PGA second round
2 Buttler and Woakes drag England from the brink to set up thrilling Pakistan win
3 Bayern Munich complete formalities with rout over Chelsea
4 From Maestro to Mister: Andrea Pirlo named new Juventus boss
5 The game they loved so well: How cricket united Hume, McGuinness and McCann
Real news has value SUBSCRIBE
Crossword Get access to over 6,000 interactive crosswords