Silly season: when is football’s weird goal-fest going to settle down?

In the strangest of years, football is treading a fine line between the credible and the incredible 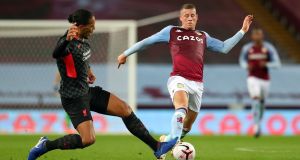 Somewhere between the fifth and sixth Aston Villa goals it began to feel as if everything was just getting . . . a little loose. A little silly. As if the writing team on the new season of “Football!” had gone wild on the macchiatos and were now throwing in plot twists for the hell of it.

Like the preposterous final segment of Casino Royale in which, for no apparent reason, Bond goes to Venice and spends half an hour blowing up an entire building.

We swallowed Leicester getting trounced by West Ham. We were just about okay with Spurs winning 6-1 at Old Trafford. But this felt . . . excessive.

“The day football went crazy,” read the back page of one newspaper, which felt a trifle overegged on the back of a handful of freak scorelines in one league in one country. Still, with the season 10 per cent through and 144 goals scored in 38 games, it’s worth asking a few pointed questions.

What’s driving this? Is it all going to settle down at some point?

And – just as crucially – what does this mean for a sport that has always sought to tread a tightrope between the credible and the incredible, the authentic and the fantastical?

If you’ve come for definitive answers, you’re in the wrong place but perhaps there are a couple of temptations we should resist at the outset.

First, that this has come entirely out of the blue. Liverpool have been playing with the handbrake on since around the turn of the year and were arguably overdue a shoeing.

Manchester United’s collapse was portended well in advance, a serially inefficient squad who somehow manage to look both horrifically stretched and horrifically bloated all at once.

Leicester, for all their devastating flourish against Manchester City, have by and large looked curiously wan since the restart; a team still in search of balance. The manner and alignment of these results may be shocking but they weren’t entirely random.

The second fallacy is that these clubs have somehow been found out, exposed as frauds, that any excellence they may have displayed was entirely imaginary. Deep down, we know this. Virgil van Dijk wasn’t always the doddering wreck he appeared on Sunday night, humiliated by Jack Grealish, clumsily lunging at Ross Barkley like a man with two pints in his hands, trying to stop his change from rolling under the quiz machine.

And so to some possible theories. Fatigue, mental and physical, feels like the elephant in the room, particularly as it is defences that appear to be malfunctioning. The lack of a proper preseason has been brutal in this respect: good defences don’t simply come together in an afternoon. It’s a painstaking process of drilling and composition, a sort of human needlework.

Even United’s defence looked very decent for much of last season when they went 19 games unbeaten in all competitions, conceding only eight times. Again: whatever you may think of him now, Harry Maguire hasn’t always defended like a man made of jam in a world made of wasps. For most of the year, he’s been fine.

Which brings us to the Great Disruption. And, on reflection, it’s little surprise that if you force players into a new campaign with a bare minimum of rest, some having played in the European post-season and some not, you’re going to get some wildly varying levels of consistency. That gets amplified several-fold when you’re also attempting a high-wire, high-pressing style that requires every piece to be finely calibrated.

Paradoxically, it’s often the teams trying to play eight-out-of-10 football but nailing it – your Evertons, your Tottenhams, your West Hams – who are outperforming expectations. This, too, may explain why the more even, restrained Championship is averaging 1.91 goals a game.

Then you have the intangibles. The last-minute disruption of positive Covid-19 tests for Thiago, Sadio Mané or Aymeric Laporte: the reshuffles, the hastily redrawn plans. The turbulence of the transfer window. The snakes-on-a-plane jeopardy of the latest VAR tweaks.

Perhaps even the empty stadiums have a part to play: a departure from familiar moorings, a sense of strange new frontiers being breached, the idea that the very foundations of the game, its look and sound and feel and purpose, are shifting underneath us.

In many ways this has been the basis of football’s ultimate triumph: its steady-state theory, its ability to churn out essentially the same flavour of product whatever the era, whatever the circumstances.

Perhaps that was the anomaly, not this circus of dazed, drained, haunted, weirded-out players, forced through a relentless 13-month slog and expected to play with 90-minute intensity. Did we really think goals were just going to carry on happening at between 2.6 and 2.8 per game forever?

Of course, you can’t argue with the entertainment. The storylines. The buzz. At a time when cinemas are being shuttered, theatres lie empty, live music has screeched to a halt and television production is in limbo, the Premier League is essentially the main source of fresh entertainment content for many. Maybe that’s the point. Maybe that’s the only point. Then again, there’s a problem with constantly telling the audience they won’t believe what they’re seeing: eventually, they may end up not believing what they’re seeing.