Spurs rack up six in dismantling of hapless Man United 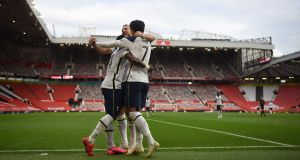 Farcical, hapless and concerning: three words to describe an absolute horror show from Manchester United, who on this evidence would struggle to give a parks team a contest. This was the first time since November 1957 – also against Tottenham – they conceded four in the first half and when Harry Kane scored a late penalty United had equalled their record Premier League defeat, having also gone down 6-1 here to Manchester City in 2011.

Every side can have an off-day and while Spurs deserve plaudits for ruthlessly punishing their hosts, where Ole Gunnar Solskjær’s side go next is the real question. The manager has the international break to digest this but though Porto’s Alex Telles and Edinson Cavani are close to joining, a left-back and 33-year-old striker hardly appear the answer.

Solskjær’s sole change was to bring in Eric Bailly for Victor Lindelöf, which meant Donny van de Beek was still to make a league start for United. José Mourinho again had no berth for Dele Alli though Son Heung-min was passed fit as Spurs set out to avenge last season’s loss in the corresponding fixture. This they would do far too easily.

Yet within 30 seconds of kick-off Spurs’ hopes took a hit when United were awarded a penalty. Bruno Fernandes passed to Anthony Martial and as the No 9 ran at goal Davinson Sánchez fouled him and Anthony Taylor pointed to the spot. Up stepped Fernandes to pause, wrong-foot Hugo Lloris, and beat the No 1 to his left. If this was poor from Spurs what followed was embarrassing from United; within seven minutes they were behind. Spurs’ equaliser might have been found in a West End comedy. Bailly and Harry Maguire proved amateur with headers, the latter attempting one back to David de Gea. It was too weak, Luke Shaw tried to hold off Éric Lamela – he could not – and the ball went to Tanguy Ndombele who smashed home.

How Aaron Wan-Bissaka must have been relieved at being the sole member of United’s backm four not complicit. Yet when Spurs took the lead there were similar shades of embarrassment. Maguire once more was chief culprit. This time a hack on Kane won a foul, bounced to his feet, hit the free-kick quick as United slept, and in ran Son to beat Bailly and Shaw for pace before he scored. United’s response was to hem Spurs in around their area. Fernandes tried to find a pass, and Martial and Mason Greenwood had shots. But then came more calamity from the home side. A Lamela ball split United asunder and left Nemanja Matic in a foot race with Son; the latter was the winner. Luckily for United he overran the ball and De Gea collected. Yet after Maguire was spun too easily by Kane – a running theme – the striker found Aurier and his shot was punched out by De Gea. Moments later Lamela’s effort was deflected off Bailly and from here United descended into utter shambles. When the corner was taken a Bailly block led to another, this time from the left. Except before it could be taken Lamela shoved Martial and moved his arm to the striker’s head. The Frenchman retaliated with a hand to the face of the Argentinian, who dropped as if hit by a George Foreman haymaker and Taylor sent Martial off.

United’s morale and spine collapsed totally. Bailly, enduring an awful outing, received a goal-kick from De Gea and hit a pass across his area. It was aimed at Matic but Kane intercepted, found Son who passed it back and the No 10 hammered home. By the break, United had conceded once more. Again, the defensive effort was close to laughable. Son was the scorer, yet the way Matic and Bailly allowed the South Korean to drift to the near post and beat De Gea deserved an inquest. At the break it could have been eight and Solskjær walked off looking as livid as he ever has.

For the second half he introduced Scott McTominay and Fred for Fernandes and Matic. This did zero to stem the white wave as Aurier roved in behind Pogba to latch on to Pierre-Emile Hojbjerg pass and hit home. Spurs were lounging in deckchairs, toying with United in a manner that Mourinho, Solskjaer’s predecessor, surely enjoyed. McTominay and Fred showed edge and venom in the challenge.

But the deep-lying issue is United’s powder-puff rearguard and its lack of bloody-mindedness. When Kane hit the sixth from the spot Mourinho smirked. Who could blame him? – Guardian

1 Gerry Thornley: Ireland don’t want to box themselves into a corner
2 Owen Doyle: Ireland suffered from officiating of the breakdown
3 Kevin McStay: Maybe a knockout All-Ireland Championship is the long-term solution?
4 New Killarney athletic track another jewel in the Kingdom’s crown
5 Sexton and Henshaw to miss Ireland’s clash with Georgia
Real news has value SUBSCRIBE