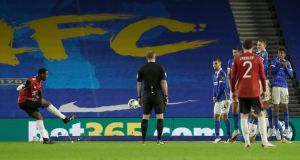 Manchester United breezed to another victory on the south coast as they reached the Carabao Cup quarter-finals at the expense of Brighton.

In a game which lacked almost all of the drama from the Premier League meeting at the Amex Stadium four days earlier, the visitors advanced with a deserved 3-0 victory.

Juan Mata laid on the opener for Scott McTominay before adding the second himself with his 50th goal for the club.

Paul Pogba came off the bench to score late on as Ole Gunnar Solskjaer’s side eased into the last eight.

Raheem Sterling struck twice as holders Manchester City eased into the quarter-finals with a comfortable 3-0 win at Burnley.

Summer signing Ferran Torres also claimed his first goal for the club as City, bidding for a fourth successive triumph in the competition, made light work of the Clarets at Turf Moor.

Victory would have been even more emphatic for a strong-looking City side were it not for a fine performance by Clarets second-choice goalkeeper Bailey Peacock-Farrell.

It has been a tough start to the campaign for Burnley but the Northern Irishman’s display, added to the team’s general high workrate and the return from injury of James Tarkowski and Ashley Barnes, ensured there were positives for Sean Dyche.

Dominic Calvert-Lewin sent another reminder to Gareth Southgate on the eve of the England squad announcement as his hat-trick powered Everton into the last eight with a 4-1 win over West Ham.

The 23-year-old opening the scoring 11 minutes in and then made sure of victory with two more late on after Robert Snodgrass levelled and Richarlison restored Everton’s lead.

Richarlison would hobble off on the hour after an earlier injury for Jonjoe Kenny, the only blemish on the night for the Toffees as they made it five wins out of five to start the campaign.

Southgate is due to name his squad on Thursday for upcoming games against Wales, Belgium and Denmark, and Calvert-Lewin must be firmly in the frame for a first senior cap after moving on to eight goals from five games.