Ireland’s Josh Cullen set for a new start with Anderlecht 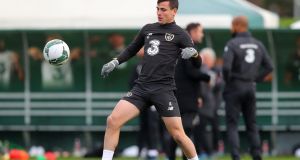 Anderlecht’s Sporting Director Peter Verbeke has described Republic of Ireland international Josh Cullen as a player of “grit and intensity,” after the 24-year-old signed a three-year contract with the Belgian club.

Cullen, who represented Ireland at Under-19 and under-21 levels, has two senior international caps but moves after having failed to establish himself in David Moyes’ first team plans at West Ham.

The midfielder, who had been with the London club since the age of nine, had loan spells at Bradford City and Bolton Wanderers and spent the last two seasons with Charlton Athletic, where he had done well enough to attract the interest of quite a few other clubs.

Having started the season back at West Ham, however, he played just one game, a League Cup tie against Charlton, before being ruled out of the next round when he tested positive for coronavirus.

Asked on Sunday about the still uncompleted move to Anderlecht, where former Manchester City skipper Vincent Kompany is in charge, Stephen Kenny said: “Josh is a good player, a very good player and he does all the simple things really well and seems to have a super attitude.”

Verbeke was also enthusiastic after the deal had been concluded on deadline day. “Josh is a midfielder who combines great running ability with grit and intensity,” he said. “He is good on the ball, strong, has a good long ball and is known for his winning mentality and dedication. He is a real team player.”

Cullen, who impressed when earning his second senior cap against Bulgaria last September, has been on standby for the current Ireland squad.