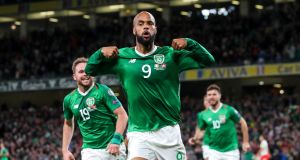 Ireland’s David McGoldrick celebrates scoring the equalising goal against Switzerland in the Euro 2020 qualifier at the Aviva Stadium in September 2019. Photograph: Ryan Byrne/Inpho

Stephen Kenny sought to be diplomatic on Sunday when asked why Ireland have struggled to win away down the years, insisting that it was a difficult issue for him to address in any detail because he had not been a part of the set-up.

The basics are pretty straightforward, though: the team simply does not score enough goals and the new manager has made it fairly clear that he sees David McGoldrick as addressing that, primarily through his ability to unlock the potential of the players around him.

Mick McCarthy was always adamant through the main phase of this qualification campaign that his teams were sent out to win games, yet defence continued to be comfortably Ireland’s best department under the last manager. Only four teams had better records at the back in the Euro2020 qualifying group stage and three of them topped their tables.

Ireland finished third in theirs having conceded just five goals. No other nation that managed to keep that column down to single figures failed to directly book their place at next summer’s finals.

Clearly, the new manager is hoping that a more positive, possession-based brand of football will help transform the team’s performance in front of goal but one glaring issue remains, nobody in his squad has been exactly banging them in for club or country over any remotely sustained period recently.

Before the games against Bulgaria and Finland last month, Kenny said there was goals in his front line but the players he was referring to had done little enough to back that claim up at this level. Aaron Connolly made the headlines when he scored twice on his full Premier League debut for Brighton almost exactly a year ago but there have been just another two in 23 top-flight appearances since and Callum O’Dowda got just one in the Championship last season.

Connolly is just 20 and looks a terrific prospect, one who is a little further down the road than Adam Idah, just 19 and with significantly less first-team football under his belt to date. In Bulgaria he created a couple of chances for others that should have been put away, while against Finland he might well have had one, or even more, himself.

Instead, Shane Duffy got Ireland’s equaliser from a set piece in Sofia and had more attempts on goal over the course of the two games than any other player. There is certainly no shame in the team having an attacking asset like that but Kenny urgently needs to develop a couple of alternative sources of goals or hope one of the players he is currently placing his faith in becomes a little more lethal.

He will at least be encouraged by the fact that Connolly, Idah and McGoldrick, with a very fine finish against Arsenal over the weekend, are all off the mark for the new season and Callum Robinson displayed great composure when putting two away against Chelsea at the end of last month.

At their best, they all look to have real ability and the manager looks set to hand McGoldrick the task of bringing that out of them against Slovakia, much as the 32-year-old does at Sheffield United where he is regarded as a key contributor despite what are very modest headline numbers.

His club manager, Chris Wilder, talks warmly about the way the Irish international drops deep to win the ball, holds it up and brings other into the attack as United hit opponents on the break. When he says McGoldrick “brings so much to the table” he is not talking about his goals – there were just two of them last season plus another couple of actual assists – but he is absolutely central to attacking side of the Sheffield side’s game.

Kenny admits that when he took over he feared that McGoldrick might retire from international football now that McCarthy, with whom he has a good relationship, is gone but the Dubliner says he was struck by the striker’s commitment, which came as a relief given how much he too rates him.

“He can link up the play, which is one of his best attributes,” says the manager. “David can do that with his back to goal and can see key opportunities for other players. So he is creative and a provider of opportunities but he also knits the play together.

“He enhances teams and makes them cohesive. He becomes the focal point and he is streetwise, he uses his body well and has a great first touch. He is also aware of the players playing off him, sees them around him with his peripheral vision . . . left and right and he gets players in.”

As with Ireland, the goals he helped to create at Sheffield United last season were spread around and the club’s top scorers had just six apiece even as the team finished a hugely impressive ninth last season. Wilder has since sought to address the situation by spending €26 million on Rhian Brewster who managed 11 goals in 22 appearances while on loan to Swansea from Liverpool, during the second half of last season.

Kenny must find other solutions, ones rooted for a start in getting his players better used to the style of play he wants from the team.

In Bratislava, he will need the midfield to push further up the field and pick out passes that allow the team’s forwards to put opponents under real pressure around their area. The risks to the team’s defensive solidity are obvious but there has to be more of a cutting edge.

As Kenny has claimed, there were some positives in last month’s games, tentative steps towards the brighter way of playing he envisages. A giant leap forward is a lot to ask of his side in game three but very significant progress is likely to be required if Ireland are to get through in the way he would want them to. Not that he wouldn’t another set-piece conversion from the big man for now.