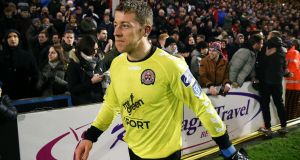 Shane Supple has been called into the Ireland squad for friendlies against France and the USA. Photograph: Gary Carr/Inpho

Bohemians goalkeeper Shane Supple has been called into Martin O’Neill’s squad for the friendly games against France and the USA with the 31-year-old having impressed, the Ireland manager said, in last Friday’s league match against Dundalk which he attended.

The full squad for the trip to Paris won’t be confirmed until Thursday but the FAI has confirmed that both Supple and Shamrock Rovers midfielder Graham Burke, who featured for the last half an hour of the game in Glasgow on Sunday, are to be included.

The two Dublin clubs play each other this Friday night and the Ireland squad leaves for Paris the next day. The following week is a little more complicated, though, with Rovers at home to Dundalk and Bohemians due to travel to Limerick on the eve of the game against the USA at the Aviva but Bohemians boss Keith Long says that the understanding is that the players will be available to train with and play for their clubs.

“The communication from the association has been clear, Shane will be available to play in the league games against Rovers and Limerick and to train with us in advance of both games. We’re delighted for him, though.

“He is clearly one of the best goalkeepers in the league and this is recognition of his form for the club over the past two years, but he is also a man of real character and depth and he will go to the squad with our blessing and best wishes.”

Burke will be delighted to have retained his place in the squad after getting on in Glasgow but the call-up marks the latest twist in a remarkable career for Supple who gave up playing club soccer entirely for six years after opting to return home, clearly disillusioned, from Ipswich Town in 2009.

The Dubliner, who had previously been capped at under-21 level, decided to concentrate on Gaelic football and made it into the county’s senior panel. In 2015 he returned to soccer with Crumlin United and amid a fair bit of interest, joined Bohemians the following year.

O’Neill said on Sunday that he had been impressed with the way the goalkeeper had imposed himself against the league leaders and with Darren Randolph and Keiren Westwood both missing, he has decided to bring him into the squad to have a closer look.

Gary Rogers had previously been brought in by O’Neill but Burke became the first player still at a League of Ireland club to make it onto the field during the current manager’s reign, albeit in what was an unofficial game.