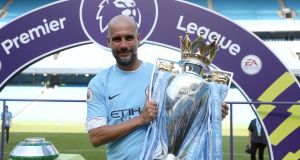 Pep Guardiola signed a new contract to commit himself to Manchester City for another three years and immediately warned the rest of English football that his intention was to make his record-breaking team even more formidable opponents.

Guardiola has agreed a two-year extension to his present deal, which had another 12 months to run, meaning he will have until 2021 to achieve the club’s ambition of winning the Champions League for the first time.

“I am so happy and excited,” he said. “It’s a pleasure to be able to work here. I enjoy working with our players every day and we will try to do our best together in the coming years.

“I will focus on the desire of my players to become a better team and every day that’s what I will try to do – to improve on the pitch and improve our players. We have a young squad with an average age of 23 and we want to keep taking steps forward and maintain the levels we’ve achieved this season.”

Guardiola’s decision to commit himself to a new deal means, in theory, he will spend longer managing City than he did either Barcelona or Bayern Munich.

His team won the Premier League by 19 points last season, setting a number of records in the process, and his new deal will almost certainly make him the highest paid manager in English football.

“Pep’s contract extension is fantastic news for Manchester City,” Ferran Soriano, the club’s chief executive, said. “We have all been privileged to witness how we have played beautiful football, won titles, broken records and reached the incredible mark of 100 Premier League points. Pep has shown this style can succeed in the Premier League in a way it has never been done before. This season has been another step of our strategic plan and the continuous effort to improve the football we play. We are very pleased with the progress.”

Gareth Southgate, the England manager, also paid tribute to Guardiola’s work, describing the 47-year-old Catalan as an inspiration for the whole of English football.

“Who coaches our youngest players? It’s dads and parents and the impact of seeing that Barcelona team five to seven years ago was enormous. He’s been an innovator. When I watch kids’ football now, I see them playing out from the back.

“I don’t see [COACHES]with heads in their hands saying ‘get it forward’. I think that’s an impact of his [BARCELONA]team, with the likes of Andrés Iniesta and Xavi.”