‘I can never look far into the future. It also depends how it goes with the club,’ he said 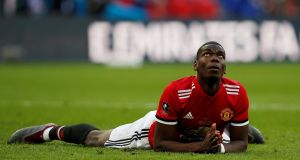 The £89million France international has had a tricky second season back at United, and has been left out of the side or substituted early.

On other occasions manager Jose Mourinho has also publicly questioned his contributions, while links with a transfer refuse to go away.

Asked by French television station Canal+ if he would remain a United player, the 25-year-old was less than forthcoming.

“We are never sure of anything but contractually it’s sure, yes,” he said.

“I can never look far into the future. It also depends how it goes with the club, how things work out.”

That may sound a loose commitment at best — contracts rarely being an issue when transfers suit all parties — but there was also no encouragement for Paris St Germain to make a move.

As one of the few clubs with the resources and ambition to attract Pogba, not to mention being his hometown club, they are routinely named as a possible destination.

But asked if turning out at the Parc des Princes held a special attraction, he said: “Honestly no it doesn’t.

“I grew up with a father and a mother who were Marseille supporters. Paris (PSG) was never really part of my daily life. But later on, yes why not play at the Parc des Princes? It’s a great pitch and a nice stadium.”

Pogba also discussed his relationship with Mourinho, insisting the pair did not have to have the perfect bond to work together professionally.

He said: “There were times where I wasn’t playing, I was on the bench. There was a lot of talk, people thought it wasn’t working out.

“But a coach and a player don’t have to be best friends, we don’t have to go to restaurants together. I had a few little problems too... football is sometimes all about the mental side. He put me on the bench and I gave my response on the pitch. I always give everything I’ve got.”

Pogba was equally quick to point out that Mourinho had helped him grow in seniority by allowing him to captain United in certain matches.

“He made me progress in leadership,” he said.

“I had the armband with Mourinho, it was the first time in a club, it’s important for me, it makes me grow to be also a leader in the France team.”