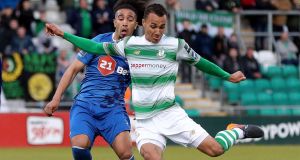 Graham Burke will play for Shamrock Rovers away to Sligo Rovers on Saturday night before travelling to Glasgow for the friendly between Celtic and the Republic of Ireland. Photograph: Bryan Keane/Inpho

Republic of Ireland manager Martin O’Neill has confirmed that Shamrock Rovers midfielder Graham Burke will play for Shamrock Rovers on Saturday evening at the Showgrounds before joining up with the senior international squad for Scott Brown’s testimonial game in Glasgow.

The 24-year-old will be a part of O’Neill’s squad for the first time and might, in other circumstances, have liked the opportunity to train with the more established international players ahead of the game. But he has been an absolutely central figure for Stephen Bradley’s side this year, scoring 10 league goals, and the Dubliners are not really in a position to have him skip the Sligo game.

O’Neill, however, does not seem to regard the situation as a major problem and it is expected that after his arrival in Scotland for the game on Sunday afternoon, Burke is likely to play some part in the encounter.

“It’s small beginnings but it’s good and hopefully he will get a chance,” said the Ireland boss. “He is going to play for Shamrock Rovers on Saturday and he will join us on Sunday for the game,

“I thought he did very well in the game where I went to see him [the recent home win over Cork City in which he scored a spectacular goal from distance]. Sometimes when players come back from England they might think their careers are over, but they can get a new lease of life in the game, get started again, get a bit of encouragement from their coaches, which is important, get a bit of self-belief and charge their way back again.

“He will play on Saturday and travel on Sunday.”

1 Welcome to Iten in Kenya – home of champions and cheats
2 Saracens to accept second 35-point deduction and effective relegation
3 St Michael’s conveyor belt showing no signs of slowing down
4 How do Klopp’s Liverpool measure up against greats of past?
5 Ulster look to secure quarter-final place with win against Bath
Real news has value SUBSCRIBE
Crossword Get access to over 6,000 interactive crosswords