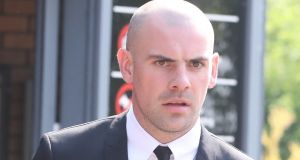 Soccer player Darron Gibson has been spared jail in the UK despite admitting a second serious drink-driving offence, after a judge said the player had a number of “significant psychological issues”.

The ex-Republic of Ireland midfielder smashed his Mercedes 4x4 into a taxi and five parked cars on St Patrick’s Day as he drove from his flat in Durham to a physio session at Sunderland, finally smashing into a garden wall.

He has lost hundreds of thousands of pounds in bonuses after his contract with the club was terminated in March, South Tyneside Magistrates’ Court had heard.

Gibson wept during the hearing where it was said he had used sleeping tablets and drunk from a litre bottle of vodka the night before.

A roadside test recorded him having 105mg of alcohol per 100ml of breath — reduced at the police station to 95mg — when the legal limit is 35mg.

Gibson had previously been banned from driving in 2015 when his car hit three cyclists while he was over the limit.

The 30-year-old, who also played for Manchester United and Everton, knocked a taxi’s wing mirror off in West Boldon in the latest incident, but carried on and smashed into parked cars on Dovedale Road, Fulwell, Sunderland.

One stationary car ended up 20m away from where it had been parked, said Sue Baker, prosecuting.

Magistrates at a previous hearing indicated Gibson may be jailed, but District Judge Roger Elsey sentenced him to a two-year community order with 250 hours of unpaid work, including 30 days of rehabilitation activity.

Gibson must also pay one of the drivers £800 (about €911) in compensation, as well as costs and a victim surcharge of £85 each, and was banned from driving for 40 months.

The judge said: “Any offence of driving with excess alcohol is serious but in my judgment the circumstances of this case are particularly serious.

“You were clearly not in control of your vehicle and you put pedestrians and other drivers at risk of injury or worse.”

However, the judge did not jail him, saying: “You have a number of significant psychological issues for which it now appears you are receiving appropriate treatment.

“The community is best protected if the causes of your binge-drinking are removed and that requires extensive work with a number of agencies.”

Henry Blackshaw, defending, said Gibson had undergone counselling with a specialist from the Priory clinic and had seen a psychiatrist.

He said Gibson felt genuine remorse for the other drivers, as well as for his family.

His wife, Danielle, and his mother and her partner were in court with him.

Mr Blackshaw said Gibson felt “heartfelt relief” no one was hurt and was taking steps to prevent it happening again.

The lawyer told the court Gibson had “emotional baggage”, saying he had a difficult upbringing which involved being bullied while growing up in Derry, Northern Ireland, before he moved to Manchester United’s academy aged 15.

He had also struggled with serious injuries in the past.

He had moved to Sunderland but did not want to uproot his children and wife from where they were living in south Manchester and missed them.

He suffered a serious muscle injury on New Year’s Day and was out of Sunderland’s first team at the time of the crash.

He was struggling to sleep and took sleeping tablets despite being warned about them, particularly with regard to mixing them with alcohol.

Mr Blackshaw said Gibson took two the night before the crash and remembered nothing from that evening until he was arrested at the scene of the crash.

Gibson insisted he was not an alcoholic and drank less than other players, Mr Blackshaw said.

His lawyer told the court Gibson hoped to have another five years playing professional soccer.

His financial loss was not just the lost wages after his contract was terminated, but he missed out on large bonuses worth hundreds of thousands for completing his 18-month contract, the court heard. – PA