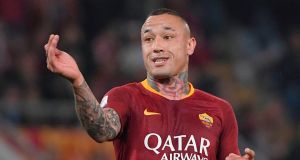 Belgium midfielder Radja Nainggolan has been left out of the squad for the World Cup. Photo: Getty Images

England’s Group G opponents named a long-list of 28 players on Monday morning — 15 of whom play their club football in England — with five names be trimmed on June 4th.

But Nainggolan, who helped propel his club past Barcelona to the Champions League semi-finals, where he scored in a thrilling second leg against Liverpool, has not made the cut.

The 30-year-old, a favourite with fans for his all-action style in midfield, has missed out on previous Martinez squads but his hopes of a place in Russia increased when he was recalled in March.

“Radja is a top player. The reason is tactical,” Martinez said, quoted on the national team’s Twitter account.

“In the last two years the team has worked in a specific manner. Other players had those roles.

“We know that Radja has a very important role in his club and we cannot give him that role in our squad.”

Celtic’s Dedryck Boyata is also in the 28-man group, as are Thorgan Hazard and Jordan Lukaku — younger brothers to Eden and Romelu.

Martinez declined to take his former Everton winger Kevin Mirallas or Liverpool’s Divock Origi, explaining: “Divock and Kevin love being with the national team and their attitude has been perfect, but that is where you need to make a decision.”

On selecting Benteke despite a record of just three goals for Palace in 2017/18, the Spaniard added: “Benteke had a difficult season. But he is experienced enough to be ready.”

Martinez also vowed to give Barcelona defender Thomas Vermaelen “every minute” to prove his fitness for the tournament before finalising his squad.

Belgium play Panama and Tunisia before meeting Gareth Southgate’s Three Lions in their final group game on June 28 in Kaliningrad.