Glenn Whelan in shortlist for FAI Player of the Year award

David McGoldrick and Enda Stevens also nominated, winner to be named next week 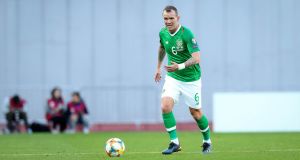 Glenn Whelan has made the shortlist for the FAI’s Senior International Player of the Year award after returning from retirement to feature in Ireland’s Euro 2020 qualifying campaign.

The other nominees for the award, which is in its 30th year, are striker David McGoldrick and left back Enda Stevens.

Having been nudged towards retirement by Mick McCarthy’s predecessor, Martin O’Neill, Whelan featured in six qualifying matches last year as Ireland ultimately failed to gain an automatic spot at the European Championship finals. While the Sheffield United duo, McGoldrick and Stevens, both came to be regarded as key players for Ireland over the course of the campaign.

Katie McCabe, Denise O’Sullivan and Louise Quinn all make the shortlist for the women’s award after contributing to what was a strong start by the senior Irish side to their European Championship qualifying group. The trio featured in the team’s two opening games, home wins over Montenegro and Ukraine, with team captain McCabe scoring on both occasions.

The shortlist for the Under-21 award is particularly strong this year with Aaron Connolly, Lee O’Connor and Dara O’Shea all having impressed. Jack Byrne and Dundalk duo Sean Gannon and Chris Shields are the contenders for the League of Ireland award.

The awards normally take place in March but were postponed because of the coronavirus pandemic. The winners are to be announced next week.