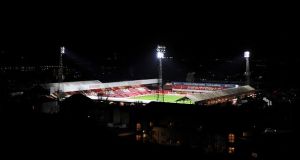 Thomas Frank has backed Brentford’s ‘BMW’ strike force of Ollie Watkins, Said Benrahma and Bryan Mbuemo to deliver against Swansea and also believes they will remain at the club beyond this summer.

Between them the Bees’ attacking trio have 57 goals this season, but they have failed to find the net in each of the last three matches — their longest drought of the term.

Brentford have suffered defeats in those fixtures to Stoke, Barnsley and then Swansea on Sunday which means they could be set for another campaign in the Championship unless a one-goal deficit can be overturned at Griffin Park on Wednesday.

If they fail to reach Wembley, the vultures will circle the west London club for the services of Watkins, Benrahma and Mbuema, who are all in their early twenties.

Ahead of the semi-final second leg, Frank was asked if ‘BMW’ will remain with Brentford next season and he replied with a smile: “Yes because we are going to be in the Premier League. ”

For that to happen, Watkins, Benrahma and Mbuemo will need to fire their side to one last victory at Griffin Park with the ground to shut after 116 years following this play-off tie. It is the biggest match of the season for both Brentford and Swansea and Frank knows his star men will turn up.

“Ollie I think is a leader and can drive the team with his behaviour and the way he presses and he can talk on the pitch and of course can score goals, but he can really drive the team,” the 46-year-old added.

“I think Said has got that ‘big player for big matches’ personality and he just looks so forward to a game like this. To Bryan, it is the same and I tell him he is a top player and to enjoy himself.

“When we speak about the margins, I am 100 percent sure one of them will score (against Swansea).

“It is very both unnatural and definitely the new normal that they are not scoring so hopefully it goes back to normal tomorrow.”

Motivation is high on a number of counts for Brentford, with Griffin Park’s farewell coupled with the fact they have never appeared in the Premier League.

The Bees have featured in the top flight before and were regulars in the First Division during the 1930s before football was suspended due to World War Two.

Once it resumed competitively in 1946, they were relegated and have never been back since, with their last significant failed attempt in 2015 when they lost in the play-offs to Middlesbrough.

“I don’t think it (history) weighs heavy on the players,” Frank insisted. “I think definitely it is part of the motivation and inspiration that it will be the first time we are in the Premier League.

“That is an extra motivational bit for when we write new history hopefully and it is something we’d all like to achieve to make sure we make or write a new chapter in the book of Brentford.”

No fans will be present to say goodbye to Griffin Park, but Frank hopes to create one last memory for them.

He said: “I will mention in the last speech to the players, ‘let’s do everything we can to make it a magical moment for the fans’ but I think the importance of this game is beyond the last game at Griffin Park.

“It would be even more magical if we had the fans of course.”

1 Seán O’Brien: Anger over my parents’ break-up never left me
2 Ireland get the job done against Italy to keep alive Six Nations hopes
3 Weekend GAA: Throw-in times, team news, TV details
4 Hugo Keenan and Will Connors: The best of friends, the best of debuts
5 France warm up for Ireland with impressive win over Wales
Real news has value SUBSCRIBE