All-Island League not one for the purists but the motivation is clear: money 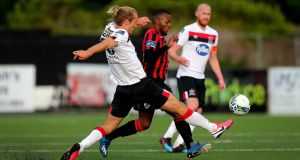 Just about the only thing that the 10 SSE Airtricity League Premier Division clubs seemed to be agreed on through the painful recent process of negotiating a restart of the league was that all of their rivals were being motivated by deplorable levels of self-interest.

Achieving unity in Irish club soccer is, the events of recent weeks have reminded us, nigh on impossible. But so unanswerable is the case for change on a grander scale that Kieran Lucid seems to have done it with his plan for an All-Island League. Well, almost.

The news that 20 of the 22 top-flight clubs north and south have now written to their respective associations requesting that they contact Uefa with a view to exploring the idea further comes some three years after the Kerry-born tech millionaire first began to put together a plan.

What is on the table now is, however, very different to what was being envisaged back then. After exhaustive consultation with the clubs conducted with the help of Dutch firm Hypercube a rather convoluted hybrid has been settled upon.

It involves clubs in the separate leagues playing two rounds of games before a split based on placings. After it, clubs from across the island would face each other with points from games counting towards two tables, the original two domestic ones and a merged one, provisionally entitled the “King of the Island”.

To wrap the island-wide competition up there would be a knockout phase but places in Uefa competitions would be allocated purely on the basis on the final domestic league tables.

It seems unlikely to win any beauty competitions but the structure scores highly in terms of meaningful games and incorporates elements of what has led to improvement in countries like Belgium over the past decade, while retaining a good deal of the integrity of the respective competitions.

In short, the format may not be one for the purists but the motivation is clear: money.

Hypercube’s modelling suggests that the new structure, if combined with relatively modest investment by clubs in facilities, should increase combined revenues five-fold over the next 10 years.

To put that in context, the clubs are starting from a desperately low point: €21 million combined (equal to the average increase in revenue experienced by each of the top 30 sides across the continent in 2018/19) according to Lucid’s figures which are largely compiled from the clubs themselves. But the prospects of increasing that figure to the €99.5 million envisaged under this plan any other way seem utterly fanciful as things stand.

The urgency of the situation is clear, all the more so just now at a time when the coronavirus pandemic has required the NIFL season to be cut short and the League of Ireland one to be paused, then severely curtailed. Across the water, the Premier League, where clubs generated an average of €272 million apiece in 2018/19, has given TV companies far more flexible access to matches in a bid to salvage broadcast rights revenues.

Europe’s big five leagues already generated three times as much money as all of the rest put together but any “new normal” might mean an even tougher environment in which the continent’s smaller fry find themselves trying to eke out an existence.

The choice is to try to do that in the space left by leagues whose business plans are firmly focused on growing, then financially exploiting fan bases in other territories, or at least explore the alternatives.

The scale and developing nature of the problem was apparent in the results of an opinion poll carried by The Irish Times back in February which suggested that around a million Irish people identify as supporting Manchester United or Liverpool to at least some extent.

Perhaps the even more worrying issue for League of Ireland clubs, though, was the presence of Barcelona in the top five supported clubs, something that suggested a growing willingness on the part of young football supporters to look further afield when forging their loyalties.

Stemming the tide seems a tall order, not just here but in territories all across Europe but doing nothing, or next to it, is unthinkable. Of course the two Irish associations want things to be better but how many across the continent have much the equivalent of the IFA’s existing five-year plan intended to get the NIFL into top Europe’s 40 leagues. There is an element here of having to run even to stand still.

Very generally speaking, there are some striking differences between the two sets of clubs here, with League of Ireland ones generating more revenue on average, while NIFL ones are more likely to own their own facilities. But they have much more in common really, most obviously that they could be generating far more money from European competitions, player sales and commercial activities.

As things stand, they are all far too small to control their own destinies in what is a rapidly developing multi-billion euro industry.

Uefa has sought to shape that change and slow the pace of it but struggles to maintain its influence in the face of opposition from the European game’s giants whose collective sense of common purpose is, we know, firmly rooted in deplorable levels of self-interest.

The situation here is far from uniquely Irish. Several small and mid-sized leagues across the continent have been eyeing up their options for a while, most obviously in Belgium and the Netherlands where there have been on/off talks about a merger.

Uefa could really do with somebody giving it a go, especially two leagues like our own who will have to overcome political challenges but whose financial risk could be comfortably underwritten by a federation with enormous income and an appetite to learn.

There is certainly a firm belief among the clubs that believe most strongly in this proposal, that having first signalled its openness to talking with interested parties about cross-border competitions almost a decade ago, Uefa will be supportive and that there will be governmental backing too if only the two associations formally take the proposal further.

The FAI has given the impression that it is open to the idea while leading figures in the IFA have suggested that it is still not. In their letter, the northern clubs suggest they are counting on their association’s willingness to bend enough to at least allow the conversation continue.

That, surely, is the very least they should be doing.