Wayne Rooney rescues a point for Everton at Anfield 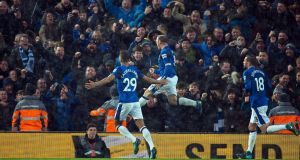 Not scoring in a Merseyside derby had always been one of Wayne Rooney’s great regrets in football. No longer. Everton’s captain for the 229th meeting between the Merseyside rivals ticked that box at Anfield and ensured regret belonged firmly to Jürgen Klopp and Liverpool.

The hosts dominated at Anfield but simply and carelessly gave away two points to a Sam Allardyce side that came with only containment and a draw in mind. Liverpool wasted gilt-edged opportunities, gifted Rooney the chance to equalise Mohamed Salah’s 19th goal of the season from the penalty spot and their manager made life easier for Everton by resting Philippe Coutinho and Roberto Firmino on the bench until the second half. Rotation resembles flawless management when it works, needless caution when it does not. Needless caution offered Everton a lifeline and Rooney seized it.

Until Salah illuminated a chilly Merseyside afternoon with his latest touch of class the derby had been a relative non-event. That was just how Allardyce wanted it. His team were set up with two banks of four purely to contain Liverpool and hit Dominic Calvert-Lewin and Oumar Niasse with first time long balls. But even the long ball proved beyond Everton, who had all week to prepare while a makeshift team played Apollon Limassol in the Europa League and Liverpool routed Spartak Moscow in the Champions League.

Allardyce knew his team would have minimal possession – it was merely 20% in the first half – but even he must have been alarmed by how careless Everton were when they had it. From the kick-off Mason Holgate swept an aimless ball out of play. By the sixth minute Jonjoe Kenny, with a free-kick, and goalkeeper Jordan Pickford, with three clearances from his area, had also kicked straight into touch. Calvert-Lewin had a thankless task with such a pitiful supply and Niasse struggled simply to hold up play in the 45 minutes he was involved.

Liverpool dominated although, for all their efforts and occasional success in getting behind the visiting full-backs, they rarely troubled Pickford in the 42 minutes before Salah struck. Allardyce’s stifling tactics were succeeding. Anfield was growing restless. Then their outstanding Egypt international changed the mood and Everton’s approach entirely.

Salah’s 13th Premier League goal of the campaign originated from a Liverpool free-kick deep in the Everton half, conceded by Idrissa Gana Gueye with a foul from behind on Sadio Mané for which he was booked. The ball was worked out to the impressive Joe Gomez and little appeared on when he found Salah on the edge of the penalty area. Salah had other ideas. Spinning away from a weak challenge by Cuco Martina, the summer signing advanced into the box, cut inside Gueye and lofted a sublime finish around Ashley Williams into the far, top corner. Pickford was left grasping at snow.

Having created little, Liverpool should have put the contest beyond their local rivals by half-time. Klopp’s careless rotation policy has worked well throughout a hectic winter schedule but it was not hard to imagine the havoc his team could have wreaked with Firmino and Coutinho on from the start. Liverpool’s territorial dominance and Everton’s meekness would have suited them perfectly.

In fairness Dominic Solanke and Alex Oxlade-Chamberlain worked tirelessly in their absence. They were left as bewildered as the Liverpool bench when Mané sprinted clear of Williams in first-half stoppage time and elected to shoot with the pair, and Salah, unmarked to his right. Mane dragged his effort wide and the second half followed the same pattern with Liverpool in control yet unable to find the comfort of a second goal. The misses lent an air of inevitability to Everton’s equaliser.

Salah sent a soaring header from a James Milner cross beyond Pickford but just wide of the Everton keeper’s far post. A Salah corner almost found Lovren unmarked at the back post only for Mason Holgate to make a vital intervention. Joe Gomez headed just over from a Salah free-kick. Klopp introduced Firmino and went to a 4-2-1-3 in search of the elusive second. It never came. Neither did a meaningful Everton attack but they were gifted a way back into a one-sided contest when awarded only their second penalty at Anfield since 1937.

Rooney swept a long ball into the path of Calvert-Lewin who brought it under control and was running away from goal when Lovren pushed him in the back with two raised hands. It was a soft but needless shove, and referee Craig Pawson had a clear view of the incident before pointing to the spot. Rooney steadied himself and fired the spot-kick down the centre of Simon Mignolet’s goal as the Liverpool keeper dived left.