Tottenham back to winning ways with Stoke romp 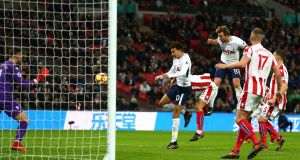 Tottenham ended a four-match Premier League winless streak in style with Harry Kane scoring a brace as they thrashed Stoke 5-1 at Wembley.

Mauricio Pochettino’s side marched through their Champions League group despite being drawn with both Real Madrid and Borussia Dortmund but their recent domestic form has been patchy at best.

Spurs had not won a Premier League game since November 5th but were always the better side in this win as an unfortunate Ryan Shawcross own goal gave them the lead.

That was followed up by three goals in 12 second-half minutes as man of the match Son Heung-min struck before a double from Kane, with Christian Eriksen adding a fifth before Shawcross pulled one back for the visitors.

The Potters are still enduring their worst start to a Premier League season having taken 16 points from 16 games, while the win for Spurs takes them to within four points of Chelsea in third.

Tottenham started the brighter of the two teams but still lacked something of a cutting edge as they failed to truly test Jack Butland in the Stoke goal.

That was until Shawcross inadvertently turned the ball past his own goalkeeper with the Stoke skipper unable to get out of the way as Son’s cross deflected off Kurt Zouma and into the defender.

Son almost made it two moments later as he burst forward after intercepting a poor Stoke corner, breaking into the box only for Butland to save his low drive.

The England goalkeeper was again in action soon after, pushing away Eriksen’s well-struck free-kick before keeping out Mousa Dembele’s effort as the hosts started to dominate proceedings.

Kane looked to have spurned a great chance when he headed wide but the offside flag had been correctly raised against the Spurs forward.

He did not have the same excuse to fall back on with his next opportunity as, having been slipped in by Son, he dragged his shot wide of Butland’s post.

Spurs were more clinical after the break as Harry Winks and Dele Alli combined to set Son away, with the South Korea international this time making no mistake as he thrashed home.

Pochettino’s men quickly added a third, as Stoke were unable to clear a corner and Ben Davies crossed for Kane to nod in from six yards.

Stoke offered some threat and Hugo Lloris did well to save from Xherdan Shaqiri as Mark Hughes’s men sought a goal to spark a comeback that never looked like materialising.

Kane added a fourth with another unerring finish before Eriksen grabbed a deserved goal at the end of another sweeping Spurs attack which again featured Son in a starring role.

Shawcross headed in a consolation goal with 10 minutes remaining as Lloris came off his line for a corner he never looked like claiming.

Despite shipping five goals, Butland was arguably Stoke’s best player and the stopper did well to keep out Eriksen before sprawling to prevent Kane sealing his hat-trick in the final minute.