Hosts score seven for the second time in Europe this season 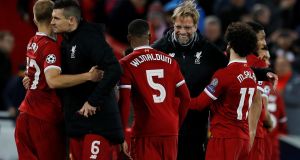 Jürgen Klopp said Liverpool’s formidable attacking quartet will strike fear throughout the Champions League after his team swept into the last 16 with a 7-0 destruction of Spartak Moscow.

Philippe Coutinho, with the first hat-trick of his Anfield career, Roberto Firmino, Sadio Mane and Mohamed Salah were all scored on the scoresheet as Liverpool struck seven without reply for the second time in the group campaign.

Victory ensured Klopp’s side advanced into the knockout phase as group winners and means the Premier League has five clubs in the last 16 of the competition for the first time. It also made Liverpool the highest scoring English team in a Champions League group campaign, the second highest ever, and Klopp admitted the attacking prowess of Coutinho, Mane, Salah and Firmino would intimidate every team in Europe providing it is maintained.

“If we perform like this tonight, if we are that clinical, then yes we can [strike fear into opponents],” said the Liverpool manager, who also oversaw a 7-0 win away in Maribor. “But we had the same players before and they didn’t score and then it is not that we talk like this. That is not a criticism of the past. If we perform like this then we are obviously a threat, 100 per cent. And if you see how Dom Solanke performed at Stoke, how Daniel Sturridge performed when he came on tonight – he could have scored two or three and he made a goal for Sadio – that’s good.”

Liverpool’s prize for winning their group, and reaching the knockout stage for the first time since 2008-09, will be a last-16 tie against either Basel, Bayern Munich, Juventus, Porto, Shakhtar Donetsk or the reigning champions Real Madrid.

Klopp said: “We knew if we won we would top the group so that’s not the biggest surprise but I think it’s strange this year in the group stages. There are a lot of really strong teams in second place. Obviously all the teams in the last 16 are strong but this year is quite special. It’s not often you can face Bayern Munich, Real Madrid or Juve if you win your group. Antonio Conte said it yesterday – there are no easy opponents and I don’t think anyone is happy when they get us in the draw. We will not be happy when we see who we face in the next round, but we will ready.”

After several underwhelming seasons in Europe’s elite competition, the Premier League will be strongly represented in the last 16 with Liverpool joining Manchester City, Manchester United, Chelsea and Tottenham Hotspur in the knockout phase. “I could not be less interested in the other teams to be honest but I think the reason [for five English teams in the draw] is quality,” Klopp said.

The Liverpool manager said the “little shadow” on the rout of the Russian champions was an injury to Alberto Moreno that could sideline the in-form left back for several matches, beginning with the Merseyside derby against Everton on Sunday.

Klopp said: “It could be something serious but he was a little more positive in the treatment room so maybe we will be lucky. We need all the boys for the next few weeks and especially for Sunday. We showed tonight we learned from the mistake we made in Seville. Now we must show we learned from the mistake we made after Maribor when we faced Tottenham [and lost 1-4].” - Guardian service