Pogba to start against CSKA Moscow before three-game ban 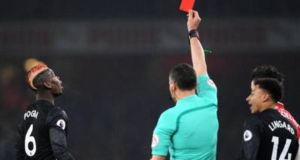 Manchester United’s Paul Pogba getting sent off against Arsenal at the Emirates Stadium on Saturday. Photograph: Getty Images

Paul Pogba will start against CSKA Moscow on Tuesday night after Manchester United decided not to appeal against his red card at Arsenal. The France midfielder was dismissed at the Emirates Stadium on Saturday, and is set to serve a three-game ban.

It is understood United have not contested the dismissal, and that the FA will not impose an additional punishment after Pogba appeared to respond to the red card with a sarcastic clap.

That means the midfielder will take the field in United’s final Champions League group game – where the possibility of equalling a club record of 40 successive home games without defeat is arguably the most important prize at stake.

United officially need a point to assure top spot and qualification, but only an extreme contrivance of results and goal difference would see them miss out on the last 16.

“He’s happy to play tomorrow. It’s the next match, the match that matters. He plays tomorrow,” said José Mourinho. “He’s very happy to play and try to keep his momentum because since he was back from his injury he’s been phenomenal.”

Zlatan Ibrahimovic, on the other hand, is being treated with kid gloves before Sunday’s top-of-the-table clash against Manchester City. The Swede has made four substitute appearances since his earlier-than-expected return from knee ligament damage, but was absent from the squad when United defeated Arsenal on Saturday evening.

Mourinho confirmed it was a conditioning issue rather than a fresh injury which kept the striker out at the Emirates, and he will give Ibrahimovic every chance of being ready to face Pep Guardiola’s Premier League leaders.

“Zlatan is not injured. He will be out again for tomorrow, but I believe he will be back to normal work after CSKA,” said Mourinho.

“Zlatan needs some time of very hard work on the muscular area that supports the knee that had the problem. When the time for that hard work comes, the fatigue comes. To work really hard for a certain period of time, he cannot play these days. He is on his cycle of work divided between the gym and the pitch.”

Luke Shaw will return to the squad for the CSKA match. The England international has been restricted to just 48 minutes this season amid rumours he is on his way out of Old Trafford but could make a rare European outing on Tuesday.

“I have to think. I am going to make a few, but not too many, changes,” Mourinho added. “We didn’t qualify yet, we didn’t finish first in the group yet, there are other clubs also involved in qualification, and I need to keep a certain balance in the team.

“But when we speak about Luke Shaw, he’s working to have an opportunity and sooner or later that opportunity will arrive because he deserves that opportunity. He is selected for tomorrow for sure – to start or be on the bench, I cannot answer.”

Nemanja Matic, Eric Bailly, Marouane Fellaini, Phil Jones and Michael Carrick will all miss the game against CSKA Moscow. “We have problems, we have injuries. Matic is injured, and when I say he is injured, he is injured,” said Mourinho.

There will definitely be a change in goal, with David de Gea rested in favour of Sergio Romero and Joel Pereira on the bench. De Gea is turning in another superb season for United, but Mourinho offered a playful response when asked if he had seen a better goalkeeper this year.