Hibs fight back from two goals down to draw with Celtic 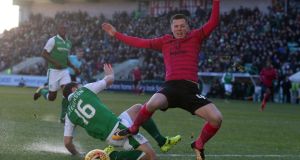 Hibernian fought from two goals behind to grab a 2-2 draw in a pulsating Ladbrokes Premiership encounter with leaders Celtic at Easter Road.

Scott Sinclair appeared to give the Hoops what looked like an unassailable lead with two goals in four minutes after the break.

However, in a dramatic finale former Parkhead defender Efe Ambrose halved the deficit in the 76th minute before 19-year-old substitute Oli Shaw levelled three minutes later with both sides having chances to clinch the win before the end.

It was a well-deserved point for Neil Lennon’s side who had drawn 2-2 at Celtic Park in September while the Hoops extended their unbeaten domestic run to 68 games to go five points clear of Aberdeen as they look forward to Monday’s Europa League last-32 draw.

Midfielder Olivier Ntcham replaced Stuart Armstrong and there was some surprise that 19-year-old striker Odsonne Edouard and not Scotland striker Leigh Griffiths, replaced Moussa Dembele who also started on the bench.

Playmaker John McGinn was back from suspension and fit-again defender Steven Whittaker and winger Brandon Barker also returned to a Hibs side who almost got caught out with barely a minute played.

Ntcham opened up the Hibees defence with a perfectly-weighted through ball and defender Lewis Stevenson had to put in a saving tackle on Callum McGregor to prevent the Hoops midfielder getting a shot in on keeper Ofir Marciano.

The match swung from end to end on a pitch glazed with frost but in the 18th minute Hibs midfielder Dylan McGeouch gifted his former club a gilt-edged opportunity.

His pass along the edge of his own penalty area was picked up by James Forrest but with only Marciano to beat from 12 yards the Scotland winger bent his shot inches past the post, before Celtic keeper Craig Gordon blocked a Martin Boyle drive.

Sinclair had been quiet in the first-half but in the 53rd minute he escaped Whittaker in the box only to fire straight at Marciano’s legs from 12 yards with Ambrose blocking Tierney’s drive from the loose ball.

However, the former Manchester City and Aston Villa player made no mistake moments later when, after his effort had been blocked, he was on hand to tap into the empty net after Edouard’s drive had crashed back off the post.

Sinclair made it 2-0 when he turned right inside Whittaker again, this time his shot taking a deflection off Marvin Bartley before ending up behind Marciano.

The Hoops winger then had the ball in the net with an angled-drive but the offside flag was up beforehand.

It looked like the Parkhead men would cruise to the final whistle but Ambrose forced the ball over the line from 10 yards with the help of a deflection after Whittaker’s drive had been blocked to his feet.

In the 78th minute, after Marciano had made saves from Celtic substitute Dembele and Sinclair, there was more drama when Shaw, on for Bartley, turned and fired high past Gordon from 12 yards after Stevenson’s cut-back had been deflected into his path.

Dedryck Boyata headed over Marciano’s goal in the final minute of normal time and then fellow Hoops defender Mikael Lustig cleared a Shaw drive off the line after Gordon had dropped the ball.

The match ended with Sinclair passing up the chance of taking home the match ball by blasting over with only the Hibs keeper to beat.

Liverpool reverse decision to use government furlough scheme 19:43
McLaren boss warns coronavirus impact could threaten Formula One 18:45
New PGA Tour schedule could bring an end to the year like no other 18:42
Jones says new players will form 60 per cent of England’s next World Cup squad 18:30
Travel restrictions could hit Ireland hard when racing returns 17:34