Jose Mourinho telling ‘the truth’ ahead of Manchester derby 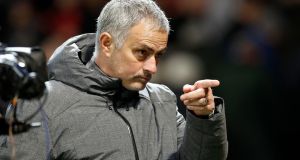 The Reds sealed progress to the Champions League last 16 on Tuesday as Romelu Lukaku and Marcus Rashford secured a 2-1 comeback victory against CSKA Moscow at Old Trafford.

Mourinho’s men top Group A after their club record-equalling 40th successive unbeaten home match — a run that will come under pressure as runaway Premier League leaders City arrive on Sunday.

Guardiola said Silva is a doubt for the clash after leaving the playmaker at home for their Champions League tie against Shakhtar Donetsk, but Mourinho is not buying it.

“The truth is Eric Bailly, no chance for the weekend. Phil Jones a chance.

“(Marouane) Fellaini a chance, Zlatan (Ibrahimovic) a big chance and (Nemanja) Matic is injured but will play for sure.

“I’m telling the truth. He’s injured but he will play for sure. (Michael) Carrick no chance.

“It’s the truth, eh? No stories of (Alexandre) Lacazette, David Silva. All the truth.”

Arsenal boss Arsene Wenger had ruled Lacazette out of Saturday’s Premier League clash with United, yet the club record signing overcame his groin injury to play all 90 minutes of the 3-1 defeat.

Mourinho’s swipe came before he left a press conference focused on a positive night for United in Europe.

“I’m really happy because we don’t want to qualify with a defeat,” he said after United made the last 16 for the first time since 2013-14.

“We don’t want to qualify with a bad performance so the objective was to qualify playing well and to get at least a positive result.

“I think we did that very, very well. The performance was good, the attitude was good.”

The 22-year-old has been criticised by the United boss and restricted to just two substitute appearances this season, yet the left-back produced a man-of-the-match display on his first start for 219 days.

“Really dangerous, creating a lot, great intensity in his game.

“No surprise that in minute 80 he is feeling the consequences of that intensity (by suffering cramp).

“It is normal, the first match of the season for him, but he was deserving of that opportunity for quite a long time.

“And he’s going to get more because the performance was really positive.”