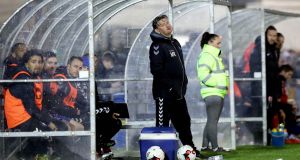 In a statement, the club claimed that the parting was by “mutual consent”, after the team won just two of their opening games of the new campaign.

“All at Limerick FC wish to thank Martin for his tremendous contribution to the club’s development since joining in 2014, and we would like to express our sincere gratitude for his hard work and commitment throughout that time.”

The club chairman Pat O’Sullivan is quoted as saying that Russell’s achievement in winning the first division so well last year has secured the Dubliner a place in the club’s history and that he will always be “warmly welcomed back to the Markets Field”.

Russell, meanwhile, is quoted himself as saying that the two sides “mutually and amicably decided to part-company”, but the agreed departure appears to have been prompted by the club’s disappointment at not having made a stronger start to the new campaign.

Limerick have won just once in the league since beating Sligo Rovers well on the opening night of the season, although two of their three defeats were inflicted by the top sides in the country: Dundalk and, on Friday night, Cork City. Russell would surely have been hoping to get a few more points on the board in the forthcoming games against St Patrick’s Athletic in Dublin, then Drogheda and Galway United, both at home.

Russell was not contactable immediately after the news was announced, while the club said that it will not issue any statement until a new appointment is to be made.

The last time Limerick were promoted as first division champions was in 2012. On that occasion, the then manager, Pat Scully, was dismissed almost immediately after the season ended.