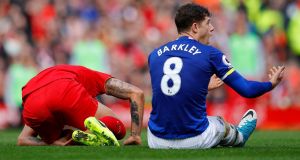 Liverpool scored some great goals as they beat Everton 3-1 in the Merseyside derby, but for some the real show only began 30 minutes after the final whistle.

Ronald Koeman was the first of the two managers to do his post-match TV interview. After softening him up with a couple of questions about the game, Sky’s reporter got to what he was really interested in: the beef.

Everyone had seen Koeman complaining about the behaviour of the Liverpool bench and Sky wanted to know just how annoyed he was.

Koeman offered the opinion that the Liverpool staff had been moaning about too many of the referee’s decisions, especially his failure to show Ross Barkley a red card for an over-the-ball lunge that caught Dejan Lovren high on the shin.

Koeman denied that they had anything legitimate to complain about, with his only comment on Barkley’s foul being “this is football”. Football was a “man’s sport”, Koeman said, and Liverpool’s bitching about the decisions was unmanly.

Playing like that, he endangers his opponents and he puts his own team’s chances in jeopardy

Considering that one of Koeman’s best players is recovering from a broken leg caused by an over-manly challenge you might have expected a more nuanced perspective from the Everton manager – but only if you didn’t know anything about the Premier League, where defensive whataboutery rules.

You hope for Barkley’s sake that Koeman offered a different opinion about the challenge in private. He should have been sent off in the previous Merseyside derby for a two-footed foul on Jordan Henderson, and his dangerous play at Anfield suggested that nothing much had been learned in the meantime. Playing like that he endangers his opponents and he puts his own team’s chances in jeopardy.

As an England international, Barkley can probably keep getting away with that sort of thing in the Premier League, where red cards are shown at a much lower rate than in any of the other five major European leagues. But if he refuses to change his ways, it would take a brave manager to pick him in a World Cup or Champions League game. Making him understand that is Koeman’s responsibility.

Sky weren’t finished with the beef though. They had got the critical comment on Liverpool, which would shortly be presented to Jürgen Klopp in the hope of eliciting a retaliatory volley from him. Now it was time to get Koeman to say something unpleasant about Martin O’Neill.

Koeman and O’Neill have been sniping at each other for months now, continuing a conflict that began when Roberto Martínez was the Everton manager, and which had previously been led on the Irish side by Roy Keane.

Keane’s withering commentary on Everton included the suggestions that they needed to “toughen up” as a club, that their own training practices might have something to do with how frequently their players seemed to get injured, and that Roberto Martínez was trying to discourage his Irish internationals from playing for Ireland because he had never played international football himself.

Last autumn, Koeman accused O’Neill of “killing the player” when he played James McCarthy for 90 and 80 minutes against Georgia and Moldova respectively. O’Neill dismissed that complaint as “bleating”.

On Friday, Koeman donned his glasses to read out a prepared statement claiming that O’Neill was “not protecting the player” when he picked McCarthy to play against Wales at a time when, Koeman believed, he was clearly not fit to play. The fact that McCarthy had to pull out of the match after feeling a problem in the warm-up would tend to support Koeman’s view.

Not that this detail made any difference to O’Neill, who quickly issued a statement which began by describing Koeman as “the master tactician of the blame game” – a remarkably sarcastic tone to take in a public communication with another manager.

O’Neill accused Koeman of not having given McCarthy enough time to rest after the Euros – an accusation Koeman rejected later on Friday in a tweet he signed “from the master tactician”.

The facts are that McCarthy has been ruled out 10 times by injuries since November 2015, and that all of these injury layoffs have related to muscular problems in the hamstring and groin

It was all grist to Sky’s mill, but you had to wonder how James McCarthy felt about the situation. Here were his two bosses squabbling again in public about which of them was the more loyal guardian of his interests.

You could understand if the player was tempted to allow himself a hollow laugh.

The facts are that McCarthy has been ruled out 10 times by injuries since November 2015, and that all of these injury layoffs have related to muscular problems in the hamstring and groin.

What he really needs if he is to recover to full fitness is a complete break from all football, but that’s not something either of his managers are prepared to grant him. They have got matches to win, and every manager prefers to hear his players telling him they are available.

Koeman suggested that McCarthy needs to “take responsibility” when a manager asks him to play before he is fully fit. Of course, it’s difficult to do that with the manager of your international team, and even more difficult when it’s the manager of the club that pays your salary.

So McCarthy keeps training and playing, and the two managers keep blaming each other when he breaks down. How lucky he must feel to have the two of them looking out for him.

Liverpool reverse decision to use government furlough scheme 19:43
McLaren boss warns coronavirus impact could threaten Formula One 18:45
New PGA Tour schedule could bring an end to the year like no other 18:42
Jones says new players will form 60 per cent of England’s next World Cup squad 18:30
Travel restrictions could hit Ireland hard when racing returns 17:34