Women footballers team up to highlight lack of support 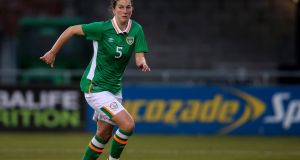 The Professional Footballers’ Association of Ireland (PFAI) has taken the remarkable step of calling a press conference to publicly air criticisms by players of the way a national team is being run.

In its advance notice of the event, which is scheduled to take place in Liberty Hall on Tuesday morning, the union says: “Members of the Republic of Ireland women’s team and their representatives in the PFAI will outline the deeply held concerns of the players about the conditions under which they are expected to perform.”

Senior internationals such as Niamh Fahey and Emma Byrne have previously criticised the lack of support for players who are not, they say, properly compensated when they return home to represent Ireland.

“There are still a lot of players who are putting their careers on hold and are out of pocket just to represent their country,” said Chelsea defender Fahey in an interview with The Irish Times last autumn. “Those are the sort of issues that we need to look at if we want to get this team qualifying for tournaments.”

Previously, Byrne had complained publicly when a €30 per diem was withdrawn and the association failed to cover the earnings lost by part-time players.

Then team coach, Sue Ronan, who remains an important figure in the women’s game at the association, insisted at that time that the cutbacks which had affected the women’s team had been applied equally across the board to every national team bar the senior men’s one.

“Our budget for the senior team this year is €360,000 – double the amount of the men’s under-21 team,” she said. “The players don’t want for anything when they’re in camp – they stay in top hotels like Carton House. Our squad has played 24 internationals in the past two years compared to 15 in the three years before that. We’re aiming to raise the profile of women’s football – that’s what the money goes towards.”

The players clearly believe that the problems persist, however, with the PFAI now maintaining that they have been “outlined on several occasions . . . without any effective action being taken”.