All in the Game: Now you can smell like Zlatan too 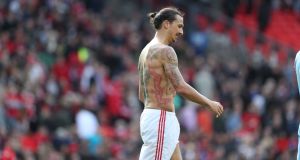 After that mishap with his elbow Zlatan Ibrahimovic has had some free time on his hands of late, and he put it to excellent use last week when he launched the latest products in his line of fragrances.

Supreme Pour Homme, we were told, “expresses Zlatan’s personality – refined casual sophistication, yet contemporary, always performing to the maximum [when he’s not suspended], with an immediate powerful instinct”.

“I want to do something and conquer, just like I do with football – my personality is in every drop,” he said, as only Zlatan can.

The fragrance was inspired by a holiday he had in Mexico and sniffs of mandarin, lemon, grapefruit, spicy ginger, juniper berries, lavender, spicy rosemary, incense and cedar wood. All you can assume is that his balcony was directly above a fruit and veg shop.

Tattoo of the Week

Well, the one that got most attention was probably that effort etched on the bottom of Fife man Callum Strang after he had doubted the wisdom of bringing on Chris Martin – the Fulham striker, not the Coldplay crooner – as a late sub in Scotland’s recent game against Slovenia: “Chris Martin coming on… Strachan playing for a draw again... if he scores the winner I’ll get Viva la Vida tattooed on my arse #Coldplay.”

And you know what happened next. But hats off to Callum, he kept his promise, and Martin’s winner is now commemorated on his left buttock.

The player is, no doubt, touched, but you’d forgive Javier Mascherano if he felt a little less moved by the tattoo on the thigh of a fan who visited him at an Argentina training session last week. It commemorates the Barcelona man’s goal-saving tackle on Arjen Robben in the 2014 World Cup semi-finals. And why would he not want to remember that moment? Well . . .

As Mundo Deportivo said of the tattoo – and Mascherano’s ability to smile while pointing at it – “surrealistic”.

“What I said was never addressed to the assistant, it was said to the air.” – Lionel Messi, in response to that four match international ban, insisting that he didn’t abuse an official, just the atmosphere around him. As grounds for appeals go, that one’s quite unique.

”In the end, he tried to save his own skin. He’s the most selfish person I have seen in my life. He always said I would be his last scalp. I know he was fixated on me . . . even without considering the jealousy he had for the footballer I was.” – Michel Platini. You should never say never, but the chances of him kissing and making up with Sepp Blatter? Slim-ish.

“I always tell him: ‘Mousa, when I write my book, you will be one of my genius players who I have been lucky to meet. One was Maradona. The others were Ronaldinho, Okocha and De La Pena.” – If Spurs manager Mauricio Pochettino feels that way about Mousa Dembele, he must genuflect in front of Dele Alli.

“We’re a bit like a mongrel dog with no nice patches on it.” – Brian Kerr after Ireland’s dogged display against Iceland.

“I am happy in London. I’d like to stay in the city but with a team that is winning things, that has a winning mentality.” – Alexis Sanchez confirms he’s leaving Arsenal for Chelsea . . .

“How did I interpret his comments? In a very positive way. There’s only one team in London, so he’s happy. There are other interpretations, I understand that, but I think he’s happy here.” – although Arsene Wenger, bless him, chose a typically optimistic alternative meaning.

“If people want the perfect system it’s probably their hot water system at home, but it ain’t a football system.” – Australian manager Ange Postecoglou responding to criticism of his 3-2-4-1 formation. Fair dinkum.

“Absolutely disgraceful that James Bond has come out as a Koppite . . . 007 belongs to this nation, not one football club . . . an icon of the world can’t have favourites . . . impressionable people see the current James Bond on earth endorsing Liverpool FC. Ian Fleming would not have allowed it.” – An extract from TalkSPORT presenter Mike Parry’s Twitter rant about his annoyance over Daniel Craig turning up at Anfield on Saturday to support Liverpool. It was April 1st, but he appeared not to be jesting.

“It is impossible to please the Greeks and Trojans. Neither did Jesus please everyone.” – A beleaguered Emanuel Santos after all that ROFLing at his bronze bust of Cristiano Ronaldo.

10: “West Brom only had one player away on international duty – they had time to work, rest and prepare,” said Jose Mourinho, making his excuses ahead of Saturday’s Premier League game. (They actually had 10 fellas away, but he was close).

Had you a rough time of it last week? Was it one thing after another? Well, trust us, no matter how grim it was, it was a party next to the one Jiang Zhipeng endured. Ready?

A calamitous error against Iran, when he headed the ball in to the path of Mehdi Taremi, resulted in the goal that saw China lose 1-0 and their World Cup qualifying hopes banjaxed. Zhipeng was still drying his tears after the game when his wife Zhang Zhiyue took to Weibo (kind of China’s Twitter) and put his dodgy performance down to his “sleeping around”, claiming he had cheated on her throughout their four-year marriage and pleading with the authorities to ban him from football.

Zhipeng responded by saying his ex-wife was being exceedingly unfair and that he only started playing away when their marriage was over. By now, all of China was intimately familiar with the details of their relationship.

No doubt relieved to be getting back to football, Zhipeng came on as a sub for Guangzhou on Saturday in a Chinese Super League game. But his arrival on the field and every touch of the ball was booed. “I didn’t expect to endure the pressure again,” he said. “But I kept telling myself it’s no big deal.”

Apart from that, his week was grand.

Exchange of the Week

That’d be the one between Bastian Schweinsteiger and American reporter Derek Henkle at the German’s press conference following his arrival at Chicago Fire.

“My question missed its mark, but it has allowed me to become better educated on the ins and outs of soccer,” Henkle told the Daily Telegraph when they contacted him. “I’m the first to admit that I don’t know everything, but I do ask.” Schweinsteiger, meanwhile, is looking forward to leading Chicago Fire to Russia 2018.

Gordon Elliott backs decision to end jumps season but rues lost opportunities 18:30
America at Large: On Long Island, longing for a return to our field of dreams 18:00
Fairyhouse and Punchestown festivals cancelled as National Hunt season ended 17:48
Wimbledon will not be held this year due to coronavirus crisis 16:51
Playoffs set to be moved again as Uefa prioritise European club competitions 15:59

1 ‘For 25 minutes I ran out of oxygen’: Pepe Reina on his coronavirus battle
2 America at Large: On Long Island, longing for a return to our field of dreams
3 Australian rugby staring into abyss as another crisis hits
4 Garry Ringrose to stay with Leinster as he signs two-year central contract
5 Gordon Elliott backs decision to end jumps season but rues lost opportunities
Real news has value SUBSCRIBE
Crossword Get access to over 6,000 interactive crosswords