Hammers agree €4.7m fee to bring ‘keeper back to east London from Middlesbrough 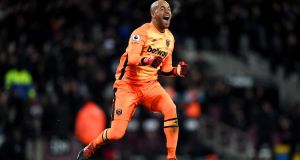 West Ham have agreed a deal to sign Darren Randolph from Middlesbrough for £4 million (€4.7m) and the transfer is expected to proceed smoothly with the goalkeeper keen to rejoin the Premier League club.

Randolph spent two seasons at West Ham before moving to Middlesbrough for £5m in 2017 and is wanted as experienced cover for Lukasz Fabianski. He would not be immediately available, though, because he is around 10 days from being fit to return from a thigh injury.

The 32-year-old Republic of Ireland international, who had 18 months remaining on his contract, had been Middlesbrough’s first-choice goalkeeper until he sustained the injury in late November.

Randolph was targeted by West Ham after the club lost faith in Roberto, who is available for transfer after a series of error-strewn performances. David Martin, who came into the team in late November, is injured and is regarded ideally as a third-choice goalkeeper.

West Ham are due to hold further talks on Tuesday with Benfica over the possible signing of Gedson Fernandes. The 20-year-old midfielder is also wanted by a number of other clubs, including in the Premier League. West Ham are proposing an 18-month loan with an option to buy. - Guardian