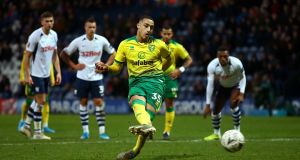 Norwich boss Daniel Farke admits that Ireland striker Adam Idah “is a good option for us” as he considers handing the Cork teenager his first Premier League start in Saturday’s clash against Manchester United at Old Trafford.

Idah scored a sensational hat-trick in last Saturday’s FA Cup third-round win over Preston and Farke is considering his options up front after admitting the Canaries will be again without top-scorer Teemu Pukki.

When asked whether 18-year-old Idah could feature, Farke said: “We will see. We are struggling a bit with injuries of our main striker options with Teemu Pukki and also Josip Drmic. And Dennis Srbeny has left us, so of course Adam Idah is a good option for us.

“Without any doubt he’s done really all right at Preston in the cup game.”

Pukki sustained a hamstring strain during the draw against Crystal Palace on New Year’s Day and had previously been carrying a toe injury, although Farke suggested the forward could return in time for the visit of Bournemouth on January 18.

The Norwich boss said of the 29-year-old: “I hope that at any point during next week he will join us during team training, and I’m pretty confident he will be available for the Bournemouth game.”

The Finland international has scored nine goals in 21 Premier League matches so far this season.

Norwich remain rooted to the foot of the Premier League table, seven points adrift of safety, but are unbeaten in their last three matches ahead of the trip to Old Trafford.

On the possibility of changing the playing system in the absence of Pukki, Farke said: “Well of course it’s crucial when one of your key players is not available.

“It’s the same even for Barcelona when Messi is not available. It’s still a huge task for them, so even more for us without any doubt.

“But we are not relying on one player, so we can’t change a whole philosophy and an idea of playing and how we want to work just because of one player.

“It can always be this player sometimes, could be an illness or injury, so it’s quite important that all are prepared sometimes to play in our way when he’s not available.

“It changes a bit in personnel terms because a player like Adam Idah or Josip Drmic – they are all different to Teemu and their movements are different. And their team-mates will have to adapt a bit more to the different style, but we won’t change our style in general.”

Chelsea stand tall defensively to repel Sevilla and come away with a point 22:22
Champions League round-up: Juventus and Barcelona off to winning starts 22:11
Waterford’s Pauric Mahony out for the season 21:26
Hugo Keenan could start in changed Ireland team against Italy 21:04
Guardiola takes blame for City’s European failings 21:12