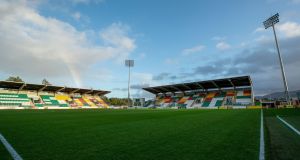 The decision to allow Shamrock Rovers II into the First Division was confirmed on Thursday. Photo: Laszlo Geczo/Inpho

First Division clubs are to consider how to respond to the FAI’s decision to press ahead with allowing Shamrock Rovers to enter a development squad in the league for the coming season. Representatives of a majority of the clubs spoke on Thursday night but will meet again after consulting back with members and boards amid continued talk of boycotts, legal action and even withdrawals from senior football.

“I knew there was a lot of anger beforehand but that seemed to have gone up a notch this evening,” said Drogheda United chairman Conor Hoey after the discussion. “The depth of feeling on this is very strong and all options remain on the table but a lot of us felt the need to go back and consult with our clubs before making any firm decisions on how to proceed.”

His comments came after it was confirmed that the association’s board had endorsed the decision of the National League Executive committee on Tuesday night that Rovers should be allowed to enter the second team, something they previously did in 2014 for a single season before abandoning the project.

“We have to get some dialogue going on this,” said Hoey. “I don’t think anybody wants the situation to create a rift here that ends up affecting the league for many years to come but there was a very strong sense this evening that people are not putting their blood, sweat and tears into ensuring their club continues to participate in this league so that they get to play against somebody’s reserve team.”

A First Division fixture list, already overdue, is now likely to be issued by the league although it is yet clear whether the clubs’ resistence to the move will disrupt the actual season.