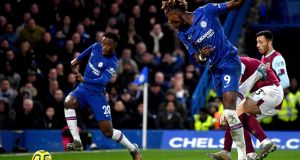 Chelsea made amends for some recent poor home form on Saturday, thumping Burnley 3-0 with goals from Jorginho, Tammy Abraham and Callum Hudson-Odoi’s first in the Premier League.

The home side looked sharp from the kick-off and earned a penalty in the 26th minute when Matthew Lowton caught Willian’s legs as the Brazilian raced down the left. Brazilian born Italian Jorginho sent Nick Pope the wrong way from the spot.

Chelsea top scorer Abraham headed Chelsea’s second from a Reece James cross, the ball slipping through Pope’s hands on the way into the net.

Abraham’s fellow youth-team graduate Hudson-Odoi made it three home goals for Chelsea for the first time in the league this season when he poked in from a cross by captain Cesar Azpilicueta four minutes after the break.

Burnley had enjoyed a couple of bright moments in the first half. Jeff Hendrick put the ball in the net in the 18th minute but captain Ben Mee was marginally offside in the build-up. Mee came close in the 36th minute but Ross Barkley cleared his point-blank downward header off the line.

Chelsea, whose shaky home form in recent weeks included defeats by West Ham United, Bournemouth and Southampton, strengthened their grip on fourth place with the win, notching 39 points from 22 games. It was the fourth Premier League defeat in a row for Burnley, who lie 15th.

Ryan promised to donate 500 Australian dollars to the bushfire relief effort in his native country for every save made in the Premier League this weekend and his defenders were also in charitable mood as they conceded a slew of chances.

Everton’s Theo Walcott had two penalty appeals turned down in the opening 20 minutes before Richarlison broke the deadlock seven minutes before halftime, making a quick stop and a tight turn in the box before curling in his effort at the far post.

Leandro Trossard hit the woodwork for Brighton early in the second half while Dominic Calvert-Lewin thought he had added a second for Everton but the video assistant referee (VAR) ruled he handled the ball when scoring and the goal was disallowed.

Brighton brought on experienced striker Glenn Murray but despite some decent chances for the 36-year-old, the visitors could not find the net and Everton hung on for the win.

The Merseysiders are 11th with 28 points from 22 games, while Brighton stand 14th with 24, four above the drop zone.

Europe-chasing Wolverhampton Wanderers were held to a 1-1 draw at home by Newcastle United in the Premier League on Saturday as visiting goalkeeper Martin Dubravka made a string of fine saves to deny the hosts three points.

Newcastle made a superb start and took the lead when Miguel Almiron smashed home after a flowing move in the seventh minute.

Wolves did not have to wait long to draw level though as Belgian international Leander Dendoncker was left completely unmarked to steer in Joao Moutinho’s corner.

Dubravka made a great close-range save to keep out Raul Jimenez’s header as Wolves asserted their authority before halftime and the Slovak continued to impress.

Wolves huffed and puffed trying to find an opening after the break, often without any success, but when they did create chances Dubravka was on hand to save his side.

As Newcastle hung on, Dubravka did superbly to keep out a far post header by Pedro Neto.

Seven of the nine Premier League meetings between the teams have now ended in draws. Wolves moved up one place to seventh with 31 points from 22 games while Newcastle have 26 points.