Sheffield Wednesday strike at the death as Leeds wobble again 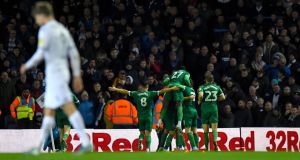 Wednesday had to soak up plenty of pressure in the first half as Marcelo Bielsa’s side dominated the Sky Bet Championship contest.

But former Leeds boss Monk saw the Owls improve after the break and Jacob Murphy gave them the lead three minutes from time.

Substitute Atde Nuhiu wrapped up the win in the fourth minute of stoppage time to take Monk’s side into the play-off places.

West Brom took over top spot after drawing 2-2 at Charlton, the Baggies now having a point more than Leeds.

Albion were twice in front through Kenneth Zohore and Hal Robson-Kanu, but Josh Davison and a Sam Johnstone own goal gave the Addicks a valuable point.

The Bees raced into a 3-0 lead inside 33 minutes, with Said Benrahma, Bryan Mbuemo and Ollie Watkins on target, the latter scoring his 18th league goal of the season.

Nahki Wells pulled one back for Rangers after the break, but Brentford are now just six points behind second-placed Leeds.

Fulham moved into fourth with a 1-0 win at Hull, Ivan Cavaleiro’s spectacular 29th-minute strike securing the three points for the Cottagers.

Nottingham Forest drop to fifth after drawing 1-1 at Reading.

In a dramatic finish, Ben Watson put Forest ahead in the sixth minute of stoppage time. But Tobias Figueiredo put the ball into his own net two minutes later.

Milwall finished with 10 men as Shaun Williams was given a straight red card five minutes from time.

The Lions have lost only once in 12 league games while Stoke are now just a point above the relegation zone.

Blackburn and Preston drew 1-1 in a Lancashire derby at Ewood Park.

Middlesbrough and Derby drew 2-2 at the Riverside.

Barnsley moved to within a point of safety by beating Yorkshire rivals Huddersfield 2-1.

Alex Mowatt and Conor Chaplin put the Tykes on top before Lewis O’Brien pulled one back for Huddersfield.

Wigan’s struggles continued with a 2-0 home defeat to Bristol City.

Jamie Paterson and Famara Diedhiou scored in the space of two minutes inside the final quarter.

Luton stay bottom after losing 2-1 at home to 10-man Birmingham.

Lukas Jutkiewicz headed the Blues into a fourth-minute lead before James Collins levelled from the penalty spot.

Gary Gardner gave Birmingham — who had Harlee Dean sent off in the closing stages — a first win in seven attempts.