City Football Group, the company behind Manchester City, has a plan for global domination 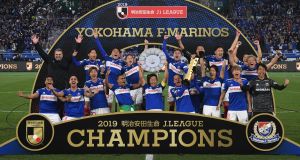 Yokohama F Marinos: Winners of the 2019 J-League and a product of City Football Group

Brian Marwood’s office, City football academy, 7 December 2019. It is 5am and the managing director of global football, a department of City Football Group, the owners of Manchester City, is squeezed around a widescreen TV with a number of his staff watching Yokohama F Marinos kick off against FC Tokyo in Japan’s J-League title decider.

CFG has 2,000-plus employees who oversee more than 1,500 footballers who play 2,500 games a year for its eight clubs across Europe, North and South America, Asia and Australasia. Marwood is responsible for all of these apart from Manchester City, who are led by Txiki Begiristain, the sporting director.

Unless Tokyo win by the unlikely margin of eight goals, Marinos will be champions. Ange Postecoglou’s Marinos are, indeed, crowned in style: a 3-0 win courtesy of goals from Theerathon Bunmathan, Erik Lima and Keita Endo. Strikes from a Thai, Brazilian and Japanese offer an apt microcosm of Marwood’s multinational project. His department can celebrate a first domestic title triumph since formation in 2013.

The global football department is the brainchild of its chief executive, Ferran Soriano. “In 2013 we had this concept of a global approach and looked at other clubs that would join City Football Group,” explains Marwood. “The majority of my staff are within scouting and recruitment. We try and apply consistency to all our clubs, use central methodology resources to work with the football directors, providing information, knowledge and reference points regarding what would be good choices for them.”

Of how Marinos, and the rest, replicate the style of Guardiola’s side, Marwood says: “It’s interesting because 11 years ago when I first came here it was very hard to recruit [coaching, scouting] talent. They saw us as another foreign-owned club that would go through a crazy period of uncertainty. But now, we’re regarded as a stable club that’s got great owners, an extremely supportive board.”

Marwood laughs. “People say: ‘Can I get a coaching job with you? I play like Pep.’ ‘OK, tell me.’ ‘It’s 4-3-3.’ ‘No, it’s a little bit more than that,’” he says. “It’s very detailed, if you look at our style, it’s about rotation. Playing through the lines. Building from the back. Combinations. Possession-based that has to have an outcome. We were amazingly fortunate to get Pep. He has been incredible but we also have somebody in Yokohama, in Ange Postecoglou, who is very passionate about the style. After we [City] played Yokohama in pre-season, Pep was impressed.”

Postecoglou is a Greece-born former Australia defender whose coaching jobs have included Brisbane Roar, Melbourne Victory and Australia. He managed the last of these for four years until resigning after qualifying for Russia 2018.

“I’d already been coaching for 20 years so there was a fair bit of evidence of how I like to play,” Postecoglou says. “I don’t think you can put a coach in and tell him how to play. You could, but I just don’t see success. There’s got to be some alignment before you start.”

Marwood, as he does with all his clubs, liaises on a regular basis with Marinos. CFG owns 20 per cent of the team from Japan’s second largest city, with Nissan holding the other 80 per cent.

“It’s about developing trust,” says Marwood. “They are fantastic people and have been very receptive to the help we can give. At the same time, they have a very experienced sporting director [Tsutomu Ogura], who’s worked for the JFA and at club level, as has the assistant [manager, Peter Cklamovski]. They come across here maybe two times a year and we go there two or three times a year. We speak every week with them – we’re always on Skype or conference calls.”

Beyond on-field success, the global football department’s remit is to develop players and provide a school for coaches, sport scientists and potential future managers of CFG clubs. One day this could include filling the biggest job of all: managing Manchester City.

Marwood has a mental picture of the ideal candidate. “The stats tell you one thing but the other aspect is: what is the person like? The person’s culture? We’re very keen to promote good values, behaviours, people that fit with our group. You don’t always get that but you should try. To understand the person is another element. If you have somebody in your house as a child and you develop them, you pretty much know after five, six, seven years what type of person they are. Then the ambition is that hopefully we can [allow] a great progression for them.”

The latest example is Nick Cushing, the women’s team manager who was this week announced as New York City’s assistant manager. Marwood cites a further example in Patrick Vieira’s trajectory from a junior role to New York City manager in 2016 before he left to take over at Nice. “He was under-23 coach [of City] and went to senior level. He therefore had experience of different pressure, an understanding of what’s required of the first team versus the development of young players,” says Marwood.

Marwood is unequivocal when asked if a woman could manage one of CFG’s men’s teams, including Manchester City. “In a Premier League team the game would have to change its philosophy a bit in terms of accepting that but I think why not,” he says. “Emma [Hayes] is doing a brilliant job at Chelsea with a women’s team. Traditionally it was always a guy in charge, but who is to say that can’t happen?”

Affording managers the time to establish themselves at a club in a febrile football industry that does not always allow it is vital. “If you think of Pep’s first year here he was very obsessed with his style,” Marwood says of a trophy-less campaign. “The team had played a slightly different way and needed adjusting. Patience is a product not embraced in this industry because there is so much noise, whether it’s fans, radio, TV, whatever. People can get spooked by that. The important thing is to try and be calm, rational. Go: ‘OK, if this guy is struggling what are the things he’s struggling with? Is it his coaching? Man-management?’

“Look at Pep. Pep first and foremost is a fantastic person – very humble, hardworking, intense but fantastic. You can start with those characteristics, then clearly you’ve got to have certain competencies. Then there is the support they can get from our group, whether that’s data, coaching methodology. Every training session is videoed and all our clubs have access to this.”

Marwood points to Guardiola having worked with Soriano and Begiristain at Barcelona. “Pep feels happy here because he knew Txiki and Ferran and has an amazing relationship with Khaldoon [al-Mubarak, the chairman],” says Marwood. “A lot of the managers I speak to that are out of work or even in work say: ‘This is the environment I’m in and it’s really hard’.”

The CFG model is unique due primarily to the finance required – this is an organisation valued north of £3.75bn – yet it has a pioneering vision via a “holistic” approach that allows synergy between football and sports science expertise and the movement between clubs of players and coaches. There is criticism that its global reach may be anticompetitive. “I’m not sure how anticompetitive it is giving a player an opportunity to play in the Premier League,” says Marwood, citing Aaron Mooy, who was at Melbourne City then Manchester City before moving to Huddersfield, and now Brighton.

“We’re promoting and enhancing the game. We don’t let that noise disrupt us. We’ve hardened ourselves: whatever people want to say about us they can. We know we’ve got evidence, we’ve got many [rewarding] stories like Aaron or [Valentín]Castellanos [who moved from Torque to NYCFC]. Players like James Poole I had to release, unfortunately. He played in our under-23s and the lower leagues. He came back to us working in our scouting office, and now he’s seconded to work in Melbourne and to start identifying players.”

Of CFG’s plans for the next decade, Marwood says: “The important thing is to make sure that the narrative is always strong. We can’t get away from making sure our clubs are in good health and what’s always important is growth. Ten and a half years ago there was one club. Now we have eight.” – Guardian