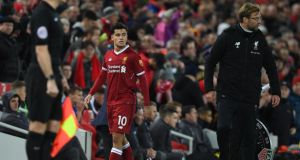 Philippe Coutinho is substituted by Jürgen Klopp in his last Liverpool appearance, against Leicester on December 30th. Photograph: Paul Ellis/AFP

Jürgen Klopp has said Liverpool had to sell Philippe Coutinho this month because he could not be sure of the Brazilian’s commitment for the remainder of the season.

Liverpool sanctioned Coutinho’s dream move to Barcelona on Saturday for €160 million, the second biggest transfer fee in history until Kylian Mbappé makes his €180 million switch to Paris Saint-Germain permanent. The Anfield club resisted three previous offers for the 25-year-old last summer and had wanted to keep their influential playmaker until the summer.

But, despite having the player under contract until 2022, Klopp insists Liverpool had no alternative but to sell as Coutinho was set on Barcelona and his continued commitment to the team could not be guaranteed.

“Because there was no other option,” said the Liverpool manager when asked why Coutinho was sold in this window. “If there is somebody who should be angry or disappointed it could be the manager of the club but I’m not because I know the club tried absolutely everything to convince Phil to stay and carry on together. It was his dream. It’s the truth when he said he left Liverpool only for one club, Barcelona, and there was a moment when we had to accept that. The club was fighting until the last second to keep him.

“There was a moment when I knew it would come up again in this window. It could have been very difficult if we had done what we could have done and said: ‘There’s your contract and you have to stay here’, and used him as a player in the second half of the season.

“That was a decision I have to make – does it make sense, do I think I can still use him, can he help us still? And to be honest, it was 100 per cent clear no chance. It was clear he was not ready to do that anymore. He did fantastic in the first part of the season after the things we had to deal with in the summer. He did fantastic and the team did fantastic. That’s over now, we cannot do that anymore, so we made that decision.”

Coutinho’s exit continued a damaging theme for Liverpool of losing key talents at their peak but Klopp insists he has sufficient talent at his disposal to compensate for the Brazil international’s exit.

The Liverpool manager added: “It’s normal in this business, you lose players and you buy players. You need to react. It is all about the atmosphere in the club. On Sunday if we have a free-kick 18 yards out [against Manchester City] if someone in the stadium thinks ‘Phil’ that is not too cool. We will have solutions for that. You use the past but you don’t suffer because of it.

“I like Phil, fantastic player, behaviour great. I said to him on the pitch after one game: ‘Chapeau, what a character’ but he still wanted to leave. He’s there, we are still here and we have to deal with the situation. This club has suffered in the past too much with things like this – Raheem Sterling, [Luis] Suárez. It’s a normal thing and we have to make the best of it. That is easy because we still have fantastic players here.” – Guardian service