Conte says he will not forget Mourinho’s 'serious words' 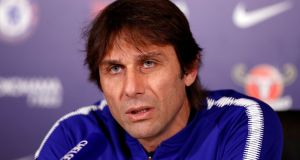 Chelsea manager Antonio Conte: “I think we both said things and we’ll see what happens in future.” Photograph: Reuters/Matthew Childs

Antonio Conte has made it plain he will not forget José Mourinho’s attack nor does he have any regrets over his part in the row that broke out between the pair last Friday.

The Chelsea manager said Mourinho was acting as if he had “demenza senile”, having taken exception to the Manchester United manager’s comments about how he did not have to “behave as a clown on the touchline” to prove his passion, which was interpreted as an attack on Conte.

Mourinho then stated he would never be banned for match-fixing – an apparent reference to Conte’s four-month ban for failing to report the practice in Italy. An incensed Conte hit back by calling Mourinho a “little man” and a “fake”.

Conte is preparing for Wednesday’s Carabao Cup semi-final first-leg against Arsenal at Stamford Bridge, and he reported Eden Hazard was fit after a calf problem. However, the game would come too soon for Ross Barkley, a £15 million signing from Everton, who is working to regain full fitness after a serious hamstring injury.

Inevitably, Conte was asked about Mourinho.

“I have this look, of a person that regrets? I don’t think so,” Conte said, after giving his inquisitor a stony-faced stare. “I think we both said things and we’ll see what happens in future.”

Conte was asked whether the League Managers’ Association had entered the dispute in an effort to resolve it.

“I think it’s not important, the association, you understand? It’s not important. He said serious words and I won’t forget this. This is not a problem from the clubs, it’s a problem between me and him. I stop. Stop.”

Meanwhile, Arsène Wenger has said he will fine Alex Iwobi if the Arsenal midfielder is confirmed to have been partying in the early hours of Saturday morning, just a day and a half before their 4-2 FA Cup defeat by Nottingham Forest.

A video purports to have shown Iwobi dancing at 2.37am during a party in Soho. It is against Arsenal’s policy to allow nights out so close to a match, and should the images be verified Wenger will be angered further by the fact Iwobi was among many players to disappoint in a performance he strongly criticised.

“If that is true, he will be fined,” Wenger said. “It is impossible to go out 48 hours before a game. It’s unacceptable. I will have to see him to see if that is right or not.

“First of all you have to be cautious with the news coming out, when you read what is reported it is like he has taken drugs. He is not involved in that at all, he has been out at a birthday party. How long has he stayed? That is important. After I will decide what happens.”

Wenger left open the possibility the social event may have had an impact on Iwobi’s display at the City Ground, but admitted there were no guarantees either way.

“Who knows that? You must have played football, you know sometimes you want to prepare 100 per cent but sometimes it is not a guarantee you will be at your best. But that is what is requested from a top-level professional.”

The Arsenal manager was openly critical of his players after Sunday’s game and went further on Tuesday morning, saying he had been “very disappointed with some individual performances”.

Alexis Sánchez was among those to sit the FA Cup defeat out, but Wenger revealed he is in contention to face Chelsea in Wednesday’s League Cup semi-final first leg at Stamford Bridge.

The door appears open for Arsenal’s interest in the West Brom defender Jonny Evans to reach a satisfactory conclusion. Although Wenger stressed there was “nothing to say” on the matter he did not deny that the clubs were in contact, while admitting it would be difficult to compete with a rival bid from Manchester City in financial terms.

“It would only be philosophical to talk about it,” he said. “As long as we don’t have any agreement with anybody, I believe the best is not to talk. I don’t know if Man City is in for anybody. I don’t know what their policy is. Financially, if the decision comes to finances with Manchester City, we know we will be second best. That is well known.”

One piece of business that appears close is the departure of Francis Coquelin, described by Wenger as a “possibility”. He denied any contact with West Ham for the midfielder, but Valencia are considered front runners for his signature.