Uncertainty in American leagues is bad news for Irish players 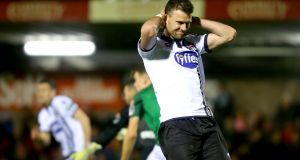 Reports over the past couple of days that Indy Eleven are about to defect from the crumbling North American Soccer League (NASL) to the United Soccer League (USL) looks like good news for the club’s two Irish players, Colin Falvey and Eamon Zayed who will at least have competitive football to look forward to in the spring if the move goes through.

It is far from certain right now that the same can be said for Richie Ryan or Antrim’s Johnny Steele at Miami or Ciaran Kilduff. He only left Dundalk in the summer to make what looked like a promising new start for himself and his young family with Jacksonville Armada.

The move could scarcely have been described even then as risk free given the state that the NASL has been in for the last few of its seven years existence but the speed of its apparent demise is still something of a shock.

The United States Soccer Federation (USSF) stripped it of its second tier status in September as a result of its inability to muster the minimum number of required clubs (12) anytime soon and the failure of the league to win an injunction halting - the move pending an appeal has apparently prompted Indy to follow North Carolina into the USL with confirmation expected this week.

A couple of new clubs, both based in California, were due to join the league but one has already suggested it would now wait until 2019 while the other’s position has become something of an irrelevance.

Those in charge at the NASL initially put a brave face on things, insisting that they could save the day but Monday’s announcement that they will suddenly switch this year to a winter season has been tricky, hard as they have tried, to spin as a positive with most observers settling for the obvious conclusion that they do not have enough teams at this stage to play the first half of their season.

The league now has a scheduled start date of sometime around August but few are confident at this stage that it will be in much better of a position then to draw up a viable fixture list than it is now.

Jacksonville’s owner, Robert Palmer, says he will wait and see what happens but has already raised the possibility of entering his side into a “lesser known league” while Miami’s problems are rather different with the scale of the club’s wage bill currently making it ineligible for the USL and its owners wanting little to do with that league’s much tighter rules and restrictions.

Its chief backer, Riccardo Silva has already lodged a case with the Court for Arbitration in Sport against the USSF over the lack of promotion/relegation between the various leagues but at a time that would be franchisees are being required to put up some €150 million dollars to buy a seat at the MLS top table, the Federation is likely to resist that any change of that front with everything it has.

On the face of it, the USL is the big winner out of all of this

MLS, as it happens, does appear to be progressing rather nicely with average crowds now comfortably over 20,000 and a queue of prospective investors wanting to add teams. The financial model remains controversial, though, with the commercial partnership between it and the USSF - Soccer United Marketing (SUM) - seen as key to underlying profitability in no small part because it exerts control over broadcasting rights to almost every aspects of broadcast rights to the game in America. Club owners (really league investors) are effectively carving up a cut of fees paid for every game shown on TV including those of the national team and even the likes of last year’s friendly between Mexico and the Republic of Ireland in New Jersey.

The national team, of course, is another part of a wider problem just now with its shock elimination from the World Cup thanks to an almost imaginably poor qualification campaign that culminated in a 2-1 defeat by Trinidad and Tobago in front of just 1,500 in October prompting the departure of both coach Bruce Arena and, ultimately, long-time USSF president Sunil Gulati, a champion of the MLS and its partnership with USL, something that has helped the latter to eclipse its rival, the NASL, which had initially split from it in 2010.

The NASL now finds itself hoping that former international Eric Wynalda, who spent a chunk of his career playing in the league with the Atlanta Silverbacks, wins the election to succeed Gulati as he is seen as an ally but it is a big field and SUM’s Kathy Carter has received some pretty significant endorsements. Her election would unlikely to prompt a change in the Federation’s position.

On the face of it, the USL is the big winner out of all of this with its numbers boosted by two of its rivals strongest outfits and its status as the American game’s second tier, a notional enough thing (though still important to sponsors and broadcasters) given the absence of promotion to the first, strengthened although its own membership is a decidedly mixed bag with averages attendances, for instance, ranging all the way from a standout 21,199 at Cincinnati down to 1,615 at Charlotte Independence and just a few hundred at a couple of MLS reserve team sides.

Numbers are small but even before the prospective arrival of Falvey and Zayed, Irish interest in the competition is strong at the top with one Dubliner James O’Connor, a former Sheffield Wednesday midfielder, having coached a Louisville City side that includes another Dubliner, Niall McCabe, to the title last season.

The American game, though, would seem to have so much more potential to offer an alternative career path to Irish players from the league here, those who have lost their way in England or to those looking to progress into the professional game after having completed college scholarships in the States and yet in the MLS Chris McCann at Atlanta United is comfortably the most prominent player from this country since the retirement of Kevin Doyle.

The door remains open with the likes of Zayed and Bethlehem Steel’s James Chambers speaking highly of their experience in the NASL and USL respectively but all of the uncertainty is only likely to add to the reservations of those in a position to consider such a move an option. Only a few weeks ago Ryan was looking to be living the American dream but right now 2018 has the potential to be a bit of a nightmare.

1 Ryan Baird scores a hat-trick as blue wave rolls over Glasgow
2 Larry McCarthy to become first overseas president of the GAA
3 Business as usual for Ireland as October date looks likely for Italy game
4 On healing and wild hurling: The re-education of Diarmuid Lyng
5 Joanne O’Riordan: Mo Farah should have to face Jeremy Kyle
Real news has value SUBSCRIBE
Crossword Get access to over 6,000 interactive crosswords