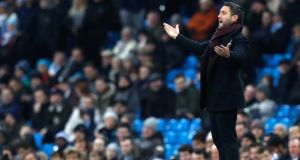 Bristol City manager Lee Johnson believes his side are still in their League Cup semi-final tie with Man City after losing the first leg 2-1 at the Etihad. Photograph: Martin Rickett/PA

Bristol City boss Lee Johnson believes his team can still topple Manchester City after pushing them to the limit at the Etihad Stadium.

The runaway Premier League leaders needed a stoppage-time Sergio Aguero winner to claim a slender 2-1 advantage over the plucky Championship outfit in the first leg of their Carabao Cup semi-final.

The sides meet again at Ashton Gate in a fortnight and, with an away goal to their name, Johnson retains hope of pulling off a shock win.

“I thoroughly enjoyed it. The buzz continues and the build-up to the game will be very exciting.”

The Robins struggled for possession early on but showed they would not be intimidated.

They eventually began to find a footing in the game and took the lead before half-time after John Stones brought down Bobby Reid to concede a penalty. Reid struck home from the spot.

The hosts rallied after the break with Kevin De Bruyne equalising but, with the Championship side defending deeply, they had to wait until the second minute of injury time for substitute Aguero to head home a Bernardo Silva cross.

“Obviously I’m disappointed with the manner in which we conceded the goal because I don’t think we deserved it,” said Johnson.

Bodies on the line

“But we put our bodies on the line, played some good football at times and had opportunities. We probably did as well as Premier League teams that have come here, and in some cases better.”

Opposite number Pep Guardiola, whose side are 15 points clear in the Premier League and unbeaten this season domestically, paid tribute to Johnson’s men.

He said: “It was a nice game, beautiful game, and all my credit to Bristol City.

“We knew that (it would be tough) because you cannot knock out four teams from the Premier League without (being) well organised and having nice players to watch.”

Guardiola, meanwhile, was unwilling to comment on continuing rumours that his club could sign Arsenal’s Alexis Sanchez this month.

There were suggestions in December City were willing to wait until summer but an injury to striker Gabriel Jesus has brought the Sanchez issue back into focus.

But Guardiola said: “I am not going to talk here about that.”