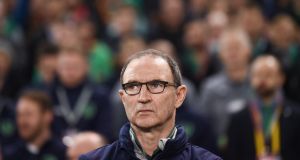 Martin O’Neill looks like remaining at the helm as Republic of Ireland manager. Photograph: Getty Images

Republic of Ireland manager Martin O’Neill, his assistant Roy Keane and other members of his backroom staff will attend this evening’s Soccer Writers’ Association of Ireland annual banquet. It had previously been understood that the northerner would skip this year’s event but the FAI have informed the association that he will be there.

The 65 year-old has been heavily linked all week with the vacancy at Stoke City although it became clear on Thursday that the job has been offered to Espanyol boss Quique Sánchez Flores who is expected to inform the Premier League club of his intentions today.

There has been no confirmation of Flores’s decision from Stoke so far but the fact that O’Neill will be in Dublin this evening suggests that he will not taking the job. The northerner was widely reported this week to have held talks about the position although he has not commented publicly on the story to confirm or deny it but it is possible that he has he has either been informed that Flores will be appointed or has ruled himself out after learning that he was regarded as the club’s fall-back plan.

The Under-16 and Under-18 Irish international sides that won European Championships in the summer of 1998 will be honoured at this evening’s event.

Senior internationals Joe Murphy, John Thompson, Andy Reid, Jon Douglas, Graham Barrett, Barry Quinn and Stephen McPhail are amongst the members of the two squads, both managed by Brian Kerr, who are expected to attend the event.

“At the time you don’t realise what a big achievement it was,” says Reid, who was a member of the younger side that triumphed in Scotland. “You just roll with it and see what happens, I don’t think we realised how big a deal it was until we got back to Dublin. We had people at the airport, national media, it was like one of the Irish teams coming back from the World Cup back in the day, it hit home them that we had achieved something really big.”

1 ‘Manchester United are lucky to have you’: Klopp responds to Donegal schoolboy’s letter
2 Iain Henderson ruled out of Ireland’s Twickenham visit
3 United greats in attendance as club hero Gregg laid to rest
4 Six Nations: Ireland v England all you need to know guide
5 Eddie Jones: back three will deal with Irish aerial threat
Real news has value SUBSCRIBE
Crossword Get access to over 6,000 interactive crosswords