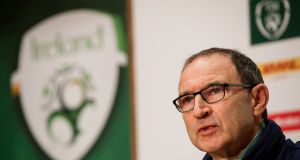 Martin O’Neill has left his post as Ireland manager to take over at Stoke City. Photo: Inpho

It is, at least, a fairly familiar place for Martin O’Neill to find himself but Stoke City have temporarily consigned the Republic of Ireland manager to the sidelines as they wait to hear from former Watford boss Quique Sanchez Flores whether he is willing to become Mark Hughes’ successor.

The 52-year-old, who is currently in charge at Espanyol, is reported to have been offered a five year contract when representatives of the Premier League club met with him in Barcelona on Wednesday. Vice chairman John Coates and chief executive Tony Scholes are understood to have travelled out to sell him a sort of ‘Potteries project’.

The Spaniard is said to have put the talk on hold so that he could focus on his side’s Cope del Rey game at Levante and while it is not known whether Coates and Scholes stayed on in order to hear his decision on Friday morning, the expectation back at the English club’s regular first team press conference on Thursday was that his intentions should be known by lunchtime with an announcement before the weekend regarded as a distinct possibility.

Quite how O’Neill will take being regarded as a fall back plan is open to conjecture but it does appear that the club has seen him as a solid Plan B, someone to be kept in play while they progressed talks with their first choice.

The one-time Real Madrid right-back led Espanyol to eighth place in La Liga last year and while the team has slipped back something this time around – they currently occupy 14th position – the suggestion is that the club’s hierarchy has not backed him in the way that he expected they would when he took on the job in the summer of 2016.

They are, nevertheless, eight points clear of the relegation zone, precisely where he left Watford when he departed from the Premier League outfit at the end of the 2015-16 season. That had started very well with the team taking 29 points from their first 18 games but with safety pretty much assured, things faded fairly dramatically and just another 16 points were secured over the remainder of the season. In the end, he was shown the door despite having kept them comfortably up and taken them to an FA Cup semi-final.

It is suggested that his current employers are confident he will not jump ship midseason but his contract at Espanyol is up in the summer and while there are options to extend by a year as things stand, there are no guarantees. Stoke, it would seem, are offering a good deal more security and more cash.

It may be that the La Liga club suddenly moves to improve his terms but if not and he decides to move, compensation would not be much of an issue.

If he declines the offer, however, then O’Neill may well find that the job is his to refuse although he seems unlikely to be offered the sort of deal that would, notionally at least, take him past his 70th birthday.

Discovering that he is the club’s second choice may dent his pride slightly but if he wants a job he was previously considered for back in 1993 he will get over that quickly enough. The FAI may take longer to get over the public sense that it has been his fall back plan these past few days.

The 65-year-old announced himself back in October that he had agreed a new two year deal in principle with John Delaney, apparently surprising his employers who were obliged to confirm the news a little hurriedly a few hours later.

Over the past few days nobody at Abbotstown has been able to confirm or deny anything, it has seemed, with the association left not so much on the sidelines but somewhere towards the back of the stand’s upper deck, watching developments unfold and hoping for the best.

It has been widely reported that O’Neill and the club have held talks and while neither side has actually confirmed anything the club certainly seems confident that the Irishman is a viable alternative in the event that Flores decides to stay where he is.

If O’Neill does go in the end, it will be a severe embarrassment for the organisation and, in particular, Delaney who may have agreed a deal but never got their man to sign it.

Beyond that, the timing could certainly be worse. There is no particular need to have a manager amongst the delegation to the Nations League draw in a couple of weeks time and there are only a couple of friendly games lined up between now and the end of the summer when the new competition begins; plenty of time to conduct a recruitment process, assuming they decide they do not want Roy Keane for the job or he decides that he simply does not want to take it.

As for O’Neill, it would be easy to understand the Ireland manager wanting a final crack at the Premier League or perhaps another big payday but the suggestion, widely floated, is that his interest has been fuelled, at least in part, by the hurt he felt over the criticism he was subjected to in the wake of the playoff defeat by Denmark.

It would be pretty remarkable but if there really is any truth to the notion, he could do worse while he waits for word of Flores’ decision on Friday morning than give Hughes a call and have a chat with him about how his last few months in the west Midlands.

1 Ryan Baird scores a hat-trick as blue wave rolls over Glasgow
2 Larry McCarthy to become first overseas president of the GAA
3 Business as usual for Ireland as October date looks likely for Italy game
4 On healing and wild hurling: The re-education of Diarmuid Lyng
5 Joanne O’Riordan: Mo Farah should have to face Jeremy Kyle
Real news has value SUBSCRIBE
Crossword Get access to over 6,000 interactive crosswords