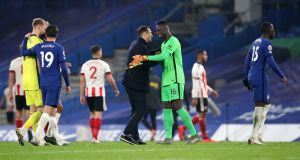 Frank Lampard has to be pleased with his new goalkeeper Edouard Mendy’s start at Chelsea. Photograph: PA

Chelsea can go top of the Premier League today. It might be for a few hours only, and they need a lunchtime victory at Newcastle to do so, but it will say something if it happens.

Exactly what is not wholly clear at this time of the season - Southampton, Tottenham and, lastly, Leicester City all took top spot over the course of the last Premier League weekend - but it will at least suggest Chelsea are getting to where they expect to be.

After a transfer window featuring seven major signings, the club did not foresee themselves being 3-0 down at West Brom in September or 2-0 ahead against Southampton in October only to draw 3-3. Chelsea did fight back at the Hawthorns but no-one in blue is happy with scramble football. Not when you have invested €250 million on transfer fees alone in one window, even if it was three months long.

But since that erratic Saints game at Stamford Bridge, Chelsea have played six times in the league and Champions League and kept five clean sheets. There were five in a row, the first time in a decade Chelsea have managed that. David McGoldrick then broke the defensive spell for Sheffield United in the last match, but Chelsea replied with four goals in under an hour. The 4-1 followed 3-0, 3-0 and 4-0.

“The balance of the team felt great,” Frank Lampard said. “I don’t want to get too carried away, but I’m happy.”

Lampard’s satisfaction was understandable. One of his big seven signings is Malang Sarr, a 21-year-old centre half brought from Nice; Sarr has been sent on loan to Porto. But five of Lampard’s significant six started against Sheffield United and three of them scored - Ben Chilwell, Thiago Silva and Timo Werner. Had Kai Havertz not tested positive for Covid, it might have been all six starting.

That had been the case at Burnley a week earlier. Then Chelsea won 3-0, Hakim Ziyech opening the scoring. Burnley was the kind of attritional, physical test those sceptical of Chelsea’s expensive re-boot would have anticipated causing problems. But Chelsea did not just win well, they played well. “They’re a top side,” Sean Dyche said, adding, “teams do gel eventually, there’s signs of it.”

The use of “eventually” seemed premature. But pressure has condensed time and patience and Lampard knows it. When Liverpool had gone to Stamford Bridge in the second match of the season and won 2-0 Chelsea’s gel was in the shower. Only two of Lampard’s new signings played that afternoon, though, and most telling of all, three of the back five have since changed.

In this space before the season’s pandemic-delayed opening weekend, the idea was raised that Chelsea’s transfers may prove transformational rather than incremental. This stemmed from the fact that they need to be. Liverpool finished last season not just 18 points clear of Manchester City in second, but 33 points clear of United in third and Chelsea in fourth. For any club other than Liverpool to win the league this season, therefore, change necessarily must be transformational.

Kepa Arrizabalaga played against Liverpool, as did Marcos Alonso and Andreas Christensen, who was sent off at the end of the first half. So this was not change, this was a continuation of the Chelsea defence that let in the same number of goals last season as Brighton.

Four days later Chelsea bought Edouard Mendy from Rennes and so far, so transformational. Chelsea have conceded 10 goals in eight games but six of them were with Kepa in goal. He has played in only three of the matches. (Willy Caballero played at West Brom).

On his debut against Tottenham in the League Cup, Mendy conceded a late, five-yard goal from Erik Lamela. But in his seven games since, only McGoldrick has beaten Mendy. This is serious change. We are not speaking of Mendy in terms of Alisson at Liverpool or Ederson at City - yet - but the 6ft 4½in goalkeeper has already made himself a presence not just at Chelsea, but in the Premier League. And in a way that Kepa did not.

Ahead of Mendy, Thiago Silva endured a torrid debut at West Brom and Silva looked an uncertain addition that day. He is 36 and has not always convinced for Paris St. Germain or Brazil. But Silva recovered to partner Kurt Zouma in central defence in the run of clean sheets, with Chilwell at left back and Reece James on the right. A collective understanding has begun and James has mentioned Silva’s on-pitch coaching. At 36 he brings more than heading the ball. He brings gel.

Defence was the area Lampard and the club needed to address and they have. Admittedly the opposition since Liverpool has not been the hardest and as Newcastle is the first of eleven games in 37 days, the ante is upped.

But Chelsea’s process of change is under way and not highlighted here are the creative talents of Ziyech, Havertz and Werner. There’s Christian Pulisic and Mason Mount as well; Tammy Abraham and Olivier Giroud; Cesar Azpilicueta and Antonio Rudiger. That N’Golo Kante probably deserves a mention. This is one talented squad. After Newcastle, it welcomes Tottenham and Jose Mourinho to Stamford Bridge on Sunday week, an occasion-game.

When in the summer of 2013 Tottenham sold Gareth Bale to Real Madrid, Spurs bought seven players with the cash. They were called the Magnificent Seven - inevitably. The results fell somewhat short of that.

Chelsea are the club who benefitted from Real’s bank account this time - the sale of Eden Hazard brought in a reported €160m. It has been spent, and then some. It is beginning to look as if Chelsea’s significant six are an upgrade.

Meanwhile at the other end, it remains a source of surprise to see McGoldrick’s Sheffield United bottom with a solitary point. It was secured with a late Billy Sharp penalty against promoted Fulham.

Otherwise it has been a story of defeat upon defeat - 10 in 11 games if the final three from last season are included - and losing 4-1 before an international break is hardly ideal.

The upside is that Chelsea is the only heavy loss Sheffield United have sustained since the re-start - five of the others have been by a single goal. So Chris Wilder is entitled to retain some optimism. They’re nearly there.

That said, West Ham at home tomorrow and West Brom away next Saturday look like a pair from which a first victory must come. Rhian Brewster is yet to score since his £23.5m transfer from Liverpool. At 20, he is a young lad under scrutiny. How a goal would ease him and his new club.